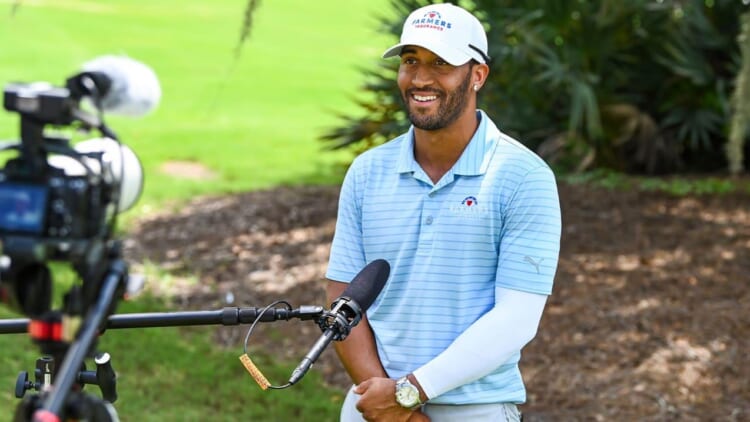 Mack was scheduled to make his PGA Tour debut at The Genesis Invitational until he got a surprise call just days before the Farmers Insurance Open last month. Fellow Advocates Pro Golf Association Tour player Kamaiu Johnson was forced to withdraw due to a positive COVID-19 test, opening a spot for Mack.

A 65-time winner on the mini-tours who spent time living out of his car to chase his dream, Mack wasn’t about to miss the opportunity. So, he hurried from his home in Orlando to Torrey Pines in San Diego.

He shot 74 and 75 on a course he didn’t know well, but took the experience and headed north a few hours to prepare for The Genesis Invitational. Mack is this year’s recipient of the Charlie Sifford Memorial Exemption, given to a deserving minority golfer chosen by the Tiger Woods Foundation.

Mack said he played 27 holes at Riviera Country Club the day after missing the cut at Torrey Pines and another 27 over Monday and Tuesday of this week.

“I really like this course a lot better than Torrey,” he told reporters Tuesday.

Mack admitted he didn’t tell the story about his financial struggles until recently sharing them the Golf Channel’s Ryan Lavner because it was a bit embarrassing to him personally.

“But I’m glad I went through it and it made me a better man and a better golfer today,” he said.

Mack’s journey includes sleeping in a cramped Mustang to save money for tournament fees and he can still recite the McDonald’s dollar menu. He once pulled his clubs from a broken-down car because, “at least if I had my clubs, I could make a few bucks.”

“It was real life,” he said. “I remember it like it was yesterday, but I’ve come a long way and I’m glad I’m not in that car, and I definitely am going to work hard and make sure I don’t get back in there.”

On Thursday he will tee it up against one of the premier fields on the PGA Tour in an invitational tournament that includes eight of the top 10 players in the world.