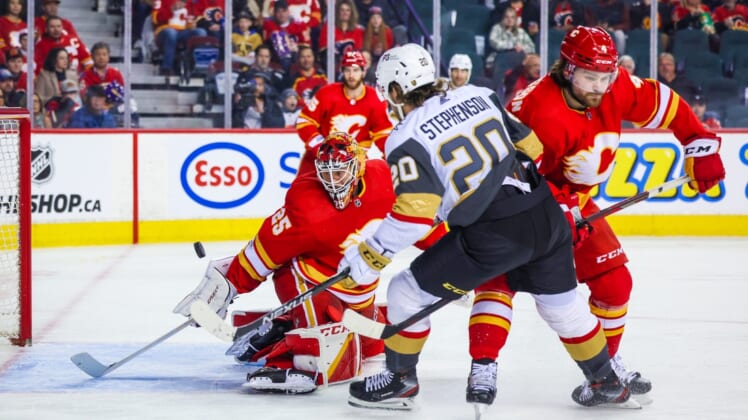 William Karlsson and Jonathan Marchessault both collected one goal and two assists as the Vegas Golden Knights pulled themselves within one point of a playoff position with a 6-1 road victory over the Calgary Flames on Thursday.

Evgenii Dadonov and Nicolas Roy each netted one goal and one assist, while Jack Eichel and Michael Amadio and also scored for the Golden Knights (41-29-5, 87 points), who are one point back of the Los Angeles Kings for third place in the Pacific Division and have a game in hand.

Goaltender Logan Thompson, who hails from Calgary, made 35 saves. The Golden Knights, with seven games remaining in the regular season, are two points behind both clubs currently in the wild-card spots, the Nashville Predators and Dallas Stars.

Dillon Dube replied for the Pacific Division-leading Flames (45-20-9, 99 points), who could have clinched a playoff spot by even losing in extra time but saw their five-game winning streak snapped. Starting goalie Jacob Markstrom was pulled for the second consecutive game after surrendering four goals on 17 shots. Dan Vladar made six saves in relief.

After Dube’s power-play tally opened the scoring just past the midway point of the first period — the league-best 48th time this season that Calgary has tallied first — it was all Golden Knights from that point on.

Eichel notched his 12th of the season at 13:09 of the first period when he blasted a one-timer from the left faceoff dot to finish a great passing play.

The visitors followed it up with a four-goal second period. Dadonov tallied just after a power-play ended, his 19th of the season, at 4:45 of the middle frame to give his team the lead.

Then Vegas broke the game open with a pair of goals 40 second apart. Amadio notched his 10th of the season when he first intercepted the puck at his own blue line and converted the rebound after Karlsson’s shot was stopped on the rush at the 8:24 mark. Marchessault made it a 4-1 affair by converting Mattias Janmark’s pass on a rush that followed another Flames turnover for his 29th goal, which spelled the end for Markstrom.

Roy made it 5-1 by deflecting a Shea Theodore point shot with 2:24 remaining in the second period for his 14th tally of the campaign, and Karlsson’s late short-handed tally rounded out the scoring.