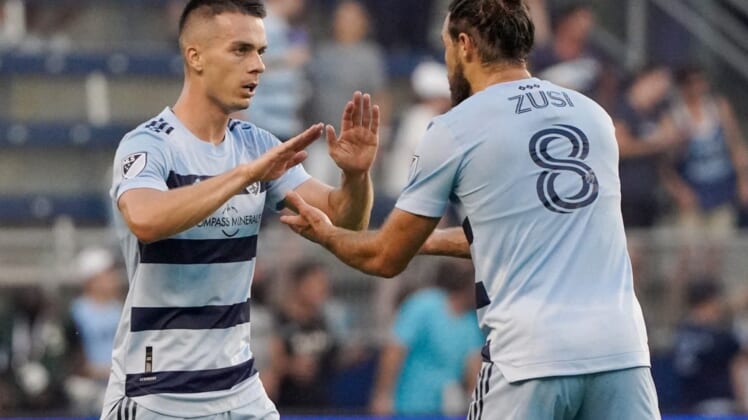 William Agada scored twice to help host Sporting Kansas City to a 4-1 win against the Portland Timbers on Sunday.

It was Agada’s second brace in the past three matches.

Agada connected for the third straight game to give Sporting KC a 1-0 lead in the 31st minute. Graham Zusi sent a cross into the box, but Portland couldn’t clear, and the ball landed by Agada for a half-volley from the left side of the goal area.

Andreu Fontas made it 2-0 in the 40th minute. After Erik Thommy’s corner bounced out of the box, Zusi sent it back in, where Fontas got his foot on it.

Thommy struck two minutes later to extend the lead to 3-0. Agada, at the top of the arc, had time and space to dish off to Thommy, who had a wide open and direct lane to fire it into the net.

It marked the third straight game that Kansas City has scored three times in the first half.

After managing just two shot attempts in the opening 45 minutes, Portland came out with some fire to start the second half.

In the 47th minute, SKC goalkeeper John Pulskamp came to the top of the box for a stop on Yimmi Chara and retreated back in time to get his hand on a long shot from Sebastian Blanco to deflect it over the crossbar.

Pulskamp denied the Timbers again in the 48th minute, coming off his line to dive in front of a shot from Dairon Asprilla.

Agada made it 4-0 in the 75th minute, taking a diagonal pass from Ben Sweat before striking from the top of the 6-yard box.

Blanco broke the shutout in the 90th minute. The goal was initially whistled for offside, but video review confirmed the tally was good.