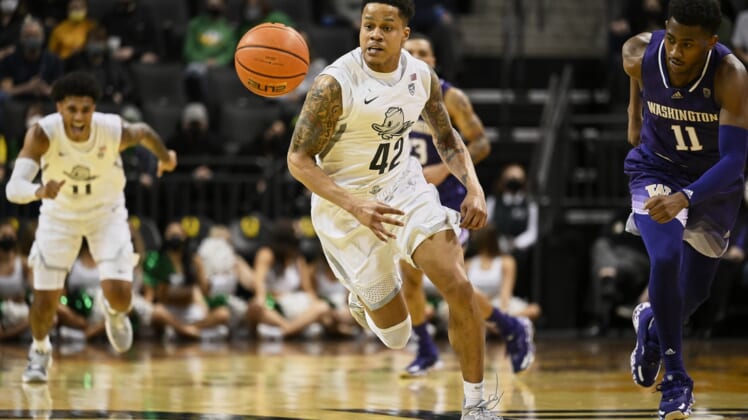 Will Richardson scored a game-high 21 points on 8-of-11 shooting from the field as Oregon pummeled Washington 84-56 Sunday night in a Pacific-12 Conference game in Eugene, Ore.

Jacob Young and Quincy Guerrier each scored 12 for the Ducks (12-6 overall, 5-2 Pac-12), who won their sixth consecutive game.

Washington’s Terrell Brown Jr., the conference’s leading scorer with 21.4 points per game, was limited to 14 on 3-of-16 shooting from the field. Emmitt Matthews Jr. added 12 points for the Huskies (9-8, 4-3), who had a three-game winning streak snapped.

Washington was without head coach Mike Hopkins for the second consecutive game because he’s in the COVID-19 protocol. Assistant Will Conroy filled in for Hopkins.

The Ducks, coming off an historic trip to Southern California, raced to a 22-6 lead midway through the first half and were never challenged.

With Thursday’s game against Washington State postponed because of virus concerns within the Cougars’ program, Oregon had a couple of extra days to prepare for the Huskies’ zone defense.

The additional time paid off, as Richardson had 13 points by halftime as the Ducks led 48-13. Richardson made 5 of 6 shots in the half, while the Huskies were 4 of 27, including 1 of 12 from 3-point range. Washington also committed 14 turnovers by the break and finished with 23.