Will New York Giants quarterback Daniel Jones have an encore performance against the Dallas Cowboys? 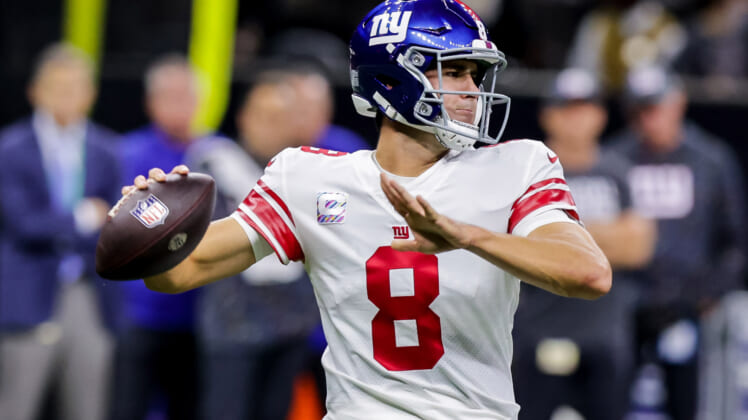 When the New York Giants face the Dallas Cowboys at AT&T Stadium on Sunday, quarterback Daniel Jones will once again be without go-to wide receivers Sterling Shepard and Darius Slayton.

Normally offenses have a hard time moving the ball when they’re without two of their top receivers. But last week against the New Orleans Saints, Jones had the best game of his career despite missing his go-to targets.

Jones completed 28-of-40 passes with two touchdowns and set a career-high in passing yards (402). A key element in his performance was that he spread the ball around, as seven different receivers caught passes in the overtime victory.

Jones’s spectacular performance earned him NFC Offensive Player of the Week honors. Now the question is, can he have an encore performance against the Cowboys.

If Big Blue is going to pull off the upset and defeat Dallas, they’ll more than likely have to win in a shootout. Entering Week 6, the Cowboys’ offense is averaging 31.5 points per game.

Slowing down quarterback Dak Prescott and Co. will be a tall task for Patrick Graham’s defense, especially with safety Jabrill Peppers out with a hamstring injury.

So it will once again be up to Jones and the offense to lead the team to victory.

On paper, Jones should be able to move the ball effectively through the air against the Cowboys 31st ranked pass defense (315.3 yards per game). However, there is one player Jones needs to be mindful of and that’s cornerback Trevon Diggs.

Diggs has recorded an interception in each of the Cowboys’ four games and leads the NFL in interceptions (five).

Dallas may elect to have Diggs shadow Kenny Golladay, but whether he does or not, expect Jones to once again spread the ball and get all of his receivers involved.

If Jones can have a similar performance as he did last week, it will go a long way in solidifying himself as the Giants quarterback of the present and future.