Will Howard leads No. 15 Kansas State past West Virginia 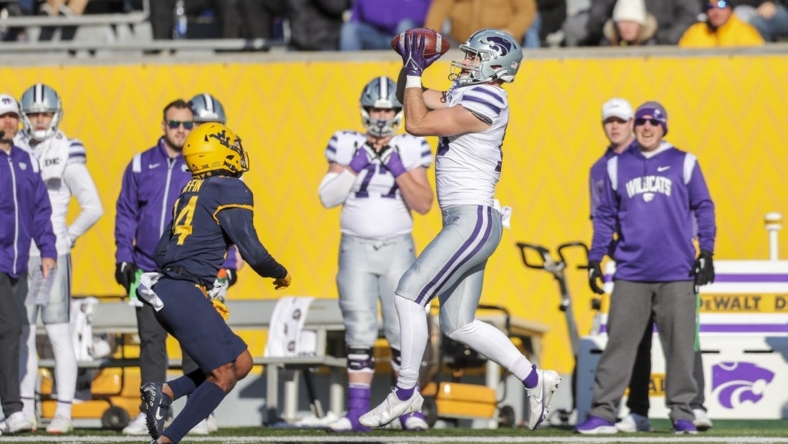 Will Howard threw for 294 yards and two touchdowns as No. 15 Kansas State matched its season high in points in defeating West Virginia 48-31 in Morgantown, W.Va., on Saturday afternoon.

Kansas State (8-3, 6-2 Big 12) will clinch a spot in the Big 12 Championship Game with a win at home against Kansas next week or a Texas loss next Saturday against Baylor.

After a high-scoring first half, West Virginia used more than 8 1/2 minutes at the start of the third quarter and came away empty after Casey Legg missed a 44-yard field goal try. Neither team scored in the third quarter.

Howard found Malik Knowles on the left sideline for a 43-yard touchdown pass less than three minutes into the fourth quarter to ice the victory. Greene later added a 13-yard touchdown run to complete the scoring.

The first quarter saw the teams combine for seven touchdowns. Kansas State went 69 yards in five plays, capped by a 15-yard touchdown run by Deuce Vaughn. On the Mountaineers’ subsequent possession, Cincere Mason intercepted the ball at the West Virginia 37 and returned it for a touchdown and a 14-0 lead.

West Virginia responded with a 26-yard touchdown pass from Greene to James to cap a 75-yard drive on eight plays. The Mountaineers then copied Kansas State’s plan with a pick-six. Malachi Ruffin picked off Howard at the Kansas State 43 and raced untouched for the score. The extra point was missed, maintaining the Wildcats’ lead at 14-13.

DJ Giddens then raced around the left end for a 49-yard touchdown to give Kansas State a 21-13 lead. After West Virginia failed to convert on fourth-and-short on their own 34, Kansas State took a 28-13 lead when Howard drove in from inside the 1-yard line. Greene answered with a 71-yard strike to James. Legg, who hadn’t missed an extra point this season, missed his second straight, leaving the first-quarter score 28-19.

Howard later found Ben Sinnott with a 15-yard scoring pass to put the Wildcats up 35-19, but Greene hit James for his third touchdown. The 2-point conversion failed.

Ty Zentner converted a pair of field goals in the final two minutes of the half to extend Kansas State’s lead to 41-25 at halftime.