Will Gordon shoots 62 to take lead at Mayakoba 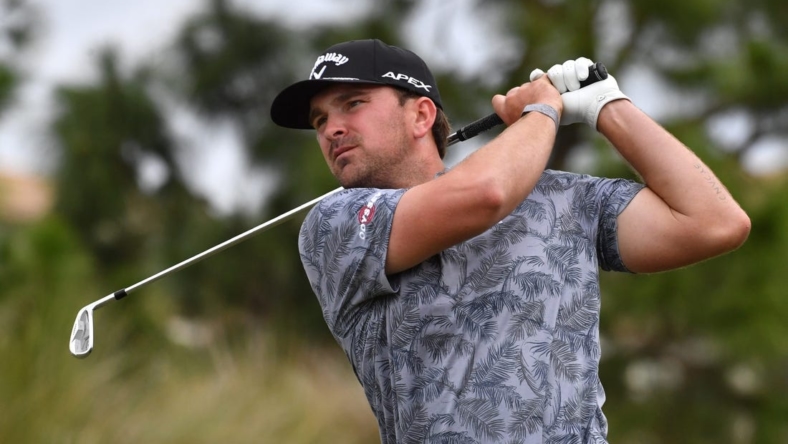 Will Gordon tied his career-low round on the PGA Tour with a 9-under 62 to take a one-stroke lead after one round of the World Wide Technology Championship at Mayakoba on Thursday in Riviera Maya, Mexico.

Gordon used an eagle, eight birdies and one bogey to shoot ahead at El Camaleon Golf Club near Cancun. Russell Henley is alone in second place after an 8-under 63.

Francesco Molinari of Italy, Scott Piercy, Sam Ryder and Harris English are tied for third at 7-under 64.

Gordon, 26, did not play on the PGA Tour last season and earned his tour card back via the Korn Ferry Tour in 2021-22. Back on the PGA circuit, he is aiming to make the most of his return.

“There’s a lot of guys kind of my age and younger that are having a lot of success out here and guys that have been out here and had some major success that I grew up playing with,” Gordon said. “Yeah, it does kind of take the fear away in a sense because you know you can do it, but you’ve still got to go out and do it and earn it. So it’s been good to see the KFT class play well this fall and I’ve gotten to see a bunch of those guys, so it’s been a cool transition this fall.”

Gordon holed an eagle on the par-5 fifth hole and made four straight birdies at Nos. 10-13 en route to reaching 9 under through 13 holes. He shot even par the rest of the way with one bogey and one birdies.

Henley’s 63 was bogey-free, with six of his eight birdies coming on the back nine.

“I haven’t played as much golf the last couple months as I normally do, and the last few tournaments I’ve played I’ve been a little off,” Henley said. “Just kind of taken some things that I did poorly there and working on them these last couple weeks and I feel like it’s gotten a little bit better. Just felt really comfortable out there today with my driver, which is big out here for me, a lot of intimidating-looking shots. And rolled some putts in, too. So it was just a nice clean round.”

A massive tie for seventh at 6-under 65 featured world No. 2 Scottie Scheffler and two-time defending Mayakoba champ Viktor Hovland of Norway.

Scheffler was recently passed by Northern Ireland’s Rory McIlroy for the No. 1 spot in the Official World Golf Ranking. With McIlroy not playing this week, Scheffler can regain the top spot with a win or a solo second finish.

Scheffler stayed bogey-free in his 65.

“I felt like a lot of my birdies today I just hit it really close to the hole,” Scheffler said. “Like 4 was really close, 5 was a tap-in. No. 9 may have been the longest birdie putt I made today and it was like 7 feet.”

Hovland won this event in 2020 and 2021. The last player to win the same tournament three straight years was Steve Stricker at the John Deere Classic 2009-11.

Hovland started on the back nine and had two bogeys but also eagled the par-5 seventh on his way to a 6-under 30 on the front nine.

“Obviously I made a couple putts and holed out from the bunker,” Hovland said. “Did a lot of good stuff today, but at the same time I felt like I hit some really bad shots, too. So I feel like there’s still opportunities to improve.”