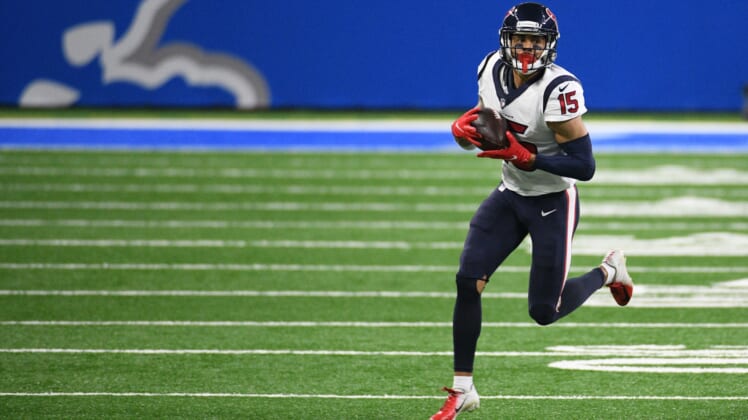 Former Houston Texans first-round pick Will Fuller has pretty much been on the back burner all offseason as other big-name receivers collect big time paychecks.

Now that the preseason is getting going, that could change relatively soon. NFL insider Aaron Wilson of Pro Football Network reports that multiple teams have shown interest in the 28-year-old pass-catcher.

Back in 2020 with then-Texans quarterback Deshaun Watson, Fuller caught 53 passes or 879 yards and eight touchdowns in 11 games. He ultimately signed with the Miami Dolphins ahead of the 2021 season, only to miss all but two games due to injury. Hence, why Fuller remains on the NFL free-agent market.

Despite those injury issues and a six-game suspension in 2020 due to violating the NFL’s policy against Performance Enhancing Drugs (PEDs), Fuller will still be of interest to multiple contenders. Here, we look at three ideal landing spots.

Indianapolis certainly has a need at wide receiver behind Michael Pittman Jr. If the team is going to have success under veteran Matt Ryan in his first season with Indianapolis, providing the former NFL MVP with as much help as possible is a necessity.

It also appears that Colts general manager Chris Ballard could be in the market for a veteran receiver leading up to Week 1 against Fuller’s former Texans team.

Indianapolis didn’t acquire Ryan from the Atlanta Falcons during the spring to sit idly by and watch the twilight years of his career go to waste. Fuller would be a low-cost option for the Colts. He’d also likely be a better option than re-signing an aged-out T.Y. Hilton.

Watson and Will Fuller teamed up with the Houston Texans from 2017-20, forming a pretty elite duo in the process. While the former will be suspended for the first six games of the 2022 season, getting him a familiar target would make a ton of sense.

Cleveland’s depth chart at wide receiver behind the recently-acquired Amari Cooper is Donovan Peoples-Jones, David Bell and Anthony Schwartz — the latter two of which are currently sidelined to injury during training camp.

Fuller would obviously be seen as an upgrade over what Cleveland has behind Cooper on its depth chart. Providing Watson with a friendly face wouldn’t hurt, either. It could help him make the transition after a drama-filled past 18 months or so.

Dallas Cowboys bring in Will Fuller

Dallas lost free-agent signing James Washington to a Jones’ fracture in the foot during training camp. He’s expected to miss up to 10 weeks. Recently re-signed starter Michael Gallup has already been ruled out for Week 1 with a torn ACL he suffered a season ago. Meanwhile, the Cowboys lost Amari Cooper and Cedrick Wilson during the offseason.

Obviously, there’s a need for Dak Prescott and Co. here. Primarily, the Cowboys would like to find someone who can succeed out of the slot. Fuller has proven that he’s capable of that since his days at Notre Dame.

With Dallas already linked to another veteran receiver on the free-agent market, Fuller could actually make more sense. He’d be a perfect No. 3 behind CeeDee Lamb and Gallup. His ability to gain yards after the catch would also fit perfectly with what Prescott does under center.