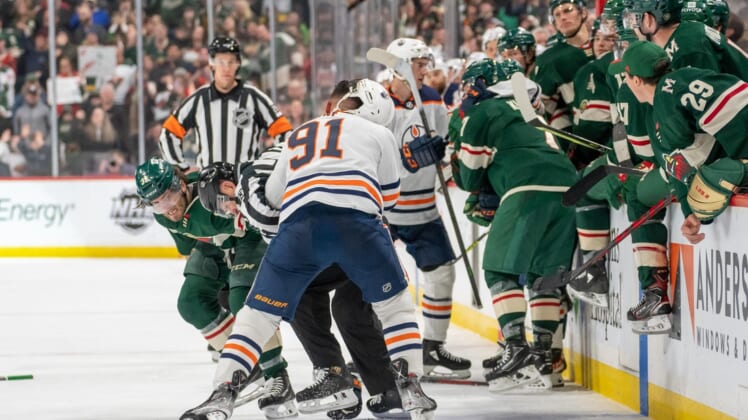 Minnesota Wild forward Ryan Hartman was fined $4,250 by the NHL on Wednesday for unsportsmanlike conduct in the team’s game against the Edmonton Oilers.

Hartman will be lighter in the wallet after extending his middle finger in the direction of Oilers forward Evander Kane following an altercation at 9:15 of the third period in the Wild’s 5-1 win on Tuesday.

While the fine is the maximum allowable under the league’s collective bargaining agreement, Hartman told reporters on Tuesday that any fine stemming from his action would be “well worth it.”

Hartman and Kane each received 10-minute misconducts and a roughing penalty for their actions in the third period. Kane also received a crosschecking minor following his hit on Wild star Kirill Kaprizov, a move that caught the attention of the remainder of the Minnesota players on the ice.

“He gave Kirill a shot from behind in a very vulnerable spot,” Hartman said of Kane. “It goes to show, we had five guys in there. They didn’t have one guy in there to help him.

“I don’t think any of their guys are going to defend him.”

Hartman, 27, scored two goals on Tuesday to boost his season total to a career-high 29 on the season. He also has set personal bests in both assists (27), points (56) and penalty minutes (81).