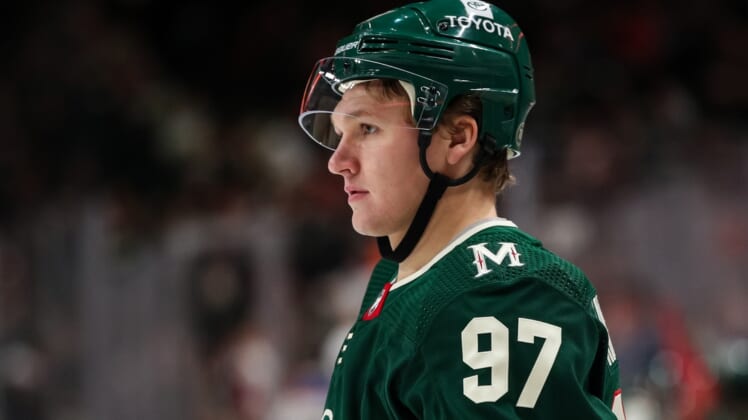 Minnesota Wild forward Kirill Kaprizov has been ruled out of Saturday’s game against the Washington Capitals, coach Dean Evason announced.

Kaprizov sustained an upper-body injury after being hit along the boards by Boston’s Trent Frederic midway into the second period of the Wild’s 3-2 victory over the Bruins on Thursday. Frederic was assessed a minor penalty for boarding and a fighting major against Minnesota defenseman Dmitry Kulikov.

“He’s seeing the docs, getting looked at here today,” Evason said Friday of Kaprizov. “… Just that (he’s) definitely out (Saturday) and we hope for the best-case scenario or the best positivity that we play (Saturday) and then we’ve got some time off to not only heal him up but other people as well.”

The Wild will host Washington on Saturday before returning to action against the visiting Anaheim Ducks on Jan. 14.

Signed to a five-year, $45 million contract in September, Kaprizov has recorded team-best totals in assists (26) and points (40) in 32 games this season. His 14 goals are one shy of the club lead (Ryan Hartman).

Kaprizov, 24, won the Calder Trophy as the NHL’s top rookie last season when he had 27 goals and 51 points in 55 games. The forward received 99 of 100 first-place votes.