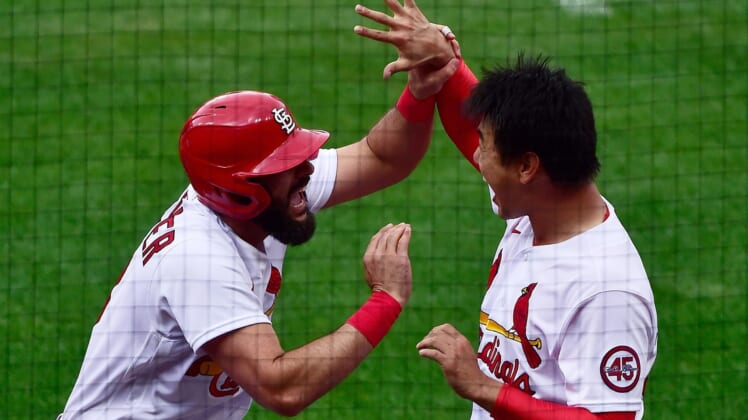 Tyler O’Neill scored the winning run on a wild pitch as the St. Louis Cardinals edged the visiting Philadelphia Phillies 4-3 in 10 innings on Thursday.

The Cardinals earned a split in the four-game series while winning for the fifth time in seven games.

The Phillies haven’t won back-to-back games since they opened the season with a four-game winning streak.

Left-hander Kwang Hyun Kim started for the Cardinals and allowed run one on seven hits in his five innings.

Outfielder Bryce Harper and shortstop Didi Gregorius did not play for the Phillies. Cardinals reliever Genesis Cabrera hit Harper in the face with a pitch Wednesday and he also plunked Gregorius in the ribs.

The issue resurfaced in the ninth inning when Phillies reliever Hector Neris hit Nolan Arenado in the arm with a pitch. When the umpires did not warn both teams against retaliation, Cardinals manager
Mike Shildt protested and was ejected.

The Cardinals took a 3-1 lead in the fifth inning. Andrew Knizner hit a bloop single and took second when the ball got away from Odubel Herrera in center field.

After Edmundo Sosa drew an intentional walk, Carpenter, who was batting .073 (3-for-41), hit for Kim and cleared the bases with his homer.

Roman Quinn leaped to reach over the right field wall, but the ball popped out of his glove.

Nick Maton led off the seventh inning with a double off of Cardinals reliever Andrew Miller and scored on Andrew McCutchen’s double.

Alec Bohm greeted reliever Giovanny Gallegos with a RBI single to tie the game 3-3 to send it toward extra innings.

The Cardinals won the game in the 10th when O’Neill moved to third base on Knizner’s groundout and scored on Hale’s errant pitch.