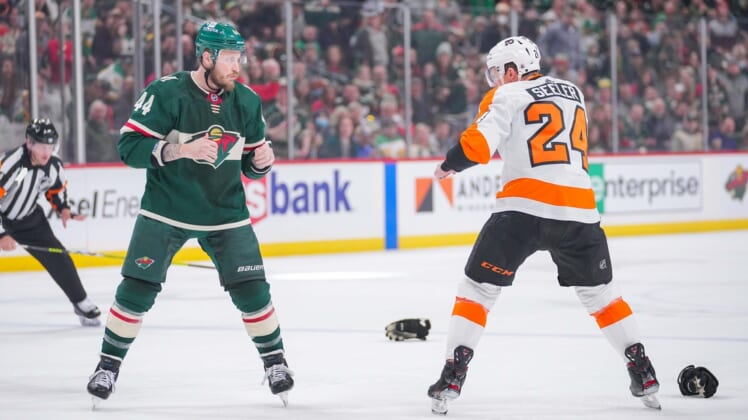 Matt Dumba, Kirill Kaprizov, Jordan Greenway and Kevin Fiala scored one goal apiece, and the Minnesota Wild cruised to a 4-1 win over the visiting Philadelphia Flyers on Tuesday night in St. Paul.

Joel Eriksson Ek and Frederick Gaudreau notched two assists apiece for Minnesota, which won its seventh game in a row.

Morgan Frost scored the Flyers’ lone goal. Philadelphia has lost four of its past five games.

Marc-Andre Fleury stopped 32 of 33 shots to win his second straight game since joining the Wild.

Minnesota opened the scoring with 5:31 remaining in the first period. Gaudreau flipped a pass to Matt Boldy, who then redirected the puck to Dumba for a one-timer that beat Jones on his glove side.

Less than two minutes later, the Wild increased their lead to 2-0 on Kaprizov’s power-play goal. Kaprizov scored goal No. 37 of the season and notched his 82nd point, putting him one shy of the franchise record set by Marian Gaborik during the 2007-08 campaign.

Minnesota made it 3-0 at 1:35 of the second period. Eriksson Ek was stopped on his initial shot, but Jones gave up a big rebound and Greenway took advantage by firing it into the back of the net for his eighth goal of the season.

Fiala gave the Wild a 4-0 advantage with 1:11 remaining in the second period. He scored on a sharp angle from the right side for his 23rd goal.

Philadelphia got on the scoreboard at 4:21 of the third period. Frost spotted a loose puck in front of the crease and punched it in for his third goal of the season and his first since Dec. 30.

Flyers rookie Noah Cates made his NHL debut in his home state and registered three shots on goal in 15 minutes of ice time. Cates grew up in Stillwater, Minn., and played collegiately at Minnesota-Duluth before signing an entry-level contract with Philadelphia.