Wild get by Sharks in overtime, clinch playoff berth 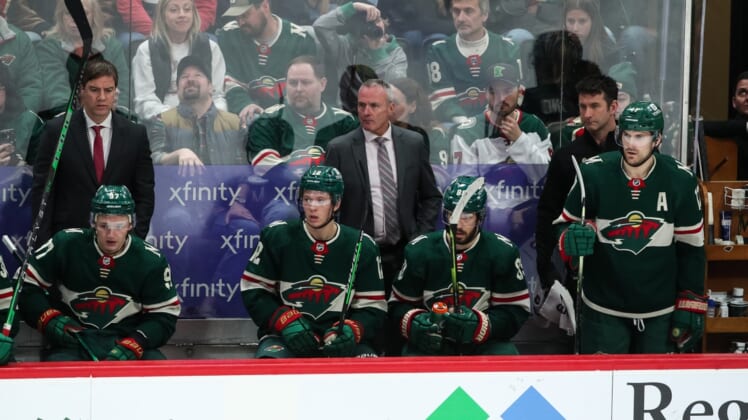 Jared Spurgeon scored two goals, including the game-winner 1:05 into overtime, to lift the Minnesota Wild to a 5-4 win over the San Jose Sharks on Sunday evening in Saint Paul, Minn.

Kevin Fiala finished with a goal and three assists for Minnesota (47-21-7, 101 points), which clinched a playoff berth for the third season in a row and the 12th time in franchise history. Matt Boldy added a goal and an assist and Dmitry Kulikov also scored for the Wild.

Nick Bonino, Noah Gregor and Rudolfs Balcers each recorded a goal and an assist for San Jose (29-34-12, 70 points).

Spurgeon finished the scoring with his ninth goal of the season. Fiala carried the puck to the high slot and ripped a wrist shot, and Spurgeon got his stick on it to redirect it past the glove side of Sharks goaltender James Reimer.

The Wild jumped to a 2-0 lead with a pair of goals in an 85-second span in the first period. Kulikov started the scoring at the 6:04 mark. He punched a slap shot through traffic for his sixth goal. Spurgeon doubled Minnesota’s lead to 2-0 at 7:29.

San Jose shaved the deficit to 2-1 with 10:22 left in the first period. Balcers threw a shot at the net for his 10th goal, which marked the first time he has reached double digits in his four seasons in the NHL.

The Sharks pulled even at 2-2 less than two minutes into the second period. A giveaway by Minnesota’s Mats Zuccarello opened the door for Matt Nieto to net his sixth goal of the campaign.

The Wild pulled back on top 3-2 on Boldy’s 14th goal of his rookie campaign 6:37 into the second period.

San Jose answered once again, this time at 11:11 of the middle period. After Brent Burns’ shot from the point was stopped, Gregor punched in the rebound for his fifth goal.

Bonino put the Sharks on top 4-3 when he recorded a short-handed goal at 1:37 of the third period. Tomas Hertl fed a quick pass to Bonino, who fired a shot from the left circle for his 12th goal.

Minnesota made it 4-4 at 8:54 of the third period. Fiala scored when he redirected a shot by Jordie Benn from the point.