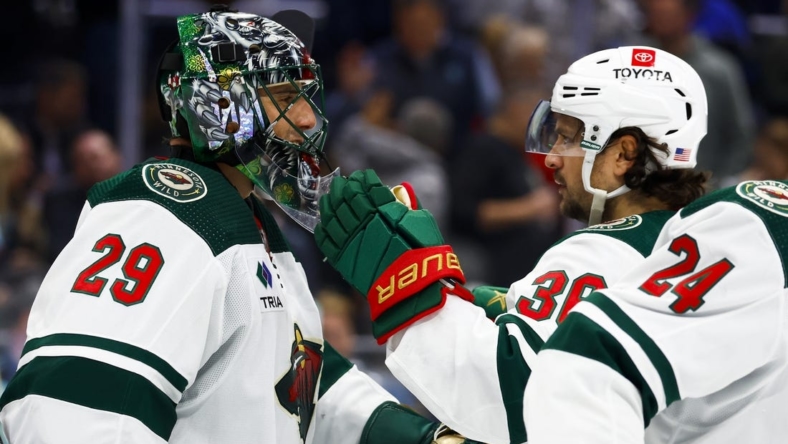 While the Minnesota Wild have struggled with offensive consistency of late, their defense and goaltending has remained relatively strong.

Meanwhile, the San Jose Sharks haven’t had much problem scoring lately. Neither have their opponents.

The Wild aim for a season-high third consecutive victory Sunday in St. Paul, Minn., when they host a Sharks club that’s still trying to win back-to-back games for the first time in 2022-23.

After being shutout in consecutive games against Seattle and Los Angeles, Minnesota broke out for a 4-1 victory at Anaheim on Wednesday. Two nights later, Mats Zuccarello scored late in the first period and Marc-Andre Fleury made 28 saves for his 72nd career shutout in a 1-0 road win against the Kraken.

“You go through surges like that during the season when you’re struggling to score, and some games everything goes in,” said Zuccarello, second on the team with 14 points.

“You just have to stick with it, stay positive. Hopefully it’s gonna come.”

The Wild have won two straight and five of the last six against the Sharks, who ended their 2-3-0 slide with Friday’s 5-4 victory at Dallas.

San Jose ranks near the bottom of the NHL by allowing 58 goals, with 28 coming in the last six games. However, the Sharks have scored 23 times during that span, while coming out of a hostile environment in Dallas with just their fourth win in 16 games could potentially spark a needed run.

“We took a step forward (at Dallas) in learning how to win a game.”

Timo Meier was one of four Sharks to record a goal with an assist Friday. He’s equaled a career high by scoring in five straight games and posted all seven of his goals this season during a seven-game point streak. However, Meier has just three points in his last eight contests versus Minnesota.

Teammate Tomas Hertl has a goal in three consecutive games and six points over that span. He has totaled three goals with six assists during a seven-game point streak against the Wild.

Meanwhile, ex-Wild netminder Kaapo Kahkonen (1-4-1, 3.70 GAA) could face his former team for the first time since being traded to San Jose in March.

Minnesota star Kirill Kaprizov leads the club with 10 goals and 16 points. But he has just two points in six career home games against the Sharks.