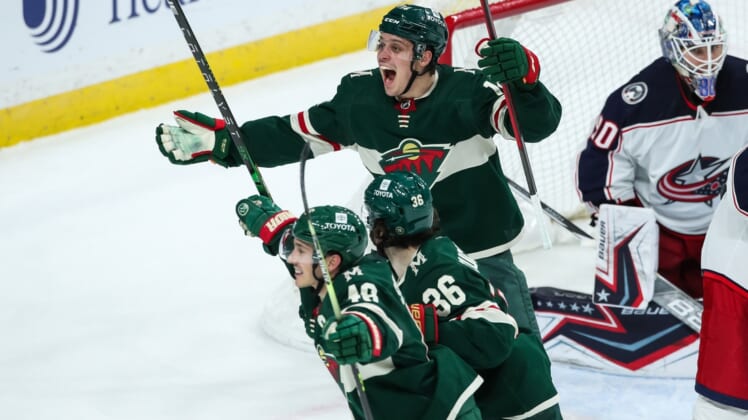 The Minnesota Wild will go for their seventh win in a row when they host the Philadelphia Flyers on Tuesday night in Saint Paul, Minn.

The Wild are coming off a 3-2 overtime win over the Colorado Avalanche on Sunday night. It marked the third straight overtime victory for Minnesota, which is 8-1-1 in its past 10 games.

“The team’s really bonded and really come together for a common goal,” Kirill Kaprizov said through an interpreter. “Every single one of us puts pressure on themselves and takes ownership of what we need to do to get better.”

Kaprizov has played a significant role in the Wild’s success, both during the winning streak and throughout the 2021-22 campaign. He has scored four goals in his past three games, he leads the team with 36 goals on the season and he is only two points shy of the Wild’s single-season points record (83) set by Marian Gaborik in 2007-08.

Mats Zuccarello ranks second on the Wild with 67 points (19 goals, 48 assists), and Kevin Fiala is third with 59 points (22 goals, 37 assists). Fiala scored the winning goal against the Avalanche on Sunday.

As Minnesota looks to keep rolling, Philadelphia is eager to snap out of a recent slump. The Flyers have lost back-to-back games and three of their past four.

In their most recent contest, Philadelphia fell short 5-4 against the Nashville Predators on Sunday. Despite goals from Travis Sanheim, Joel Farabee, Maxwell Willman and James van Riemsdyk, the Flyers could not maintain the lead as they allowed the Predators to score four of the game’s final five goals.

Cam Atkinson leads the Flyers with 50 points (23 goals, 27 assists) this season. Travis Konecny is second with 43 points (12 goals, 31 assists). After the recent trade of longtime captain Claude Giroux, Farabee is No. 3 on the active roster in scoring with 32 points (15 goals, 17 assists).

Flyers fans will get their first glimpse of rookie Noah Cates, who is set to make his NHL debut in the state where he grew up and starred in college. The Stillwater, Minn., native and Minnesota-Duluth product recently signed an entry-level contract with Philadelphia and is set to take the ice against the Wild.

“Noah has had an exceptional collegiate career and we’re happy to have him signed,” Flyers general manager Chuck Fletcher said in a statement. “Noah is a versatile and responsible two-way player who has helped Minnesota-Duluth win a national championship and represented the United States on both the World Junior and Olympic stage. We have followed his progress closely and are excited to watch his continued growth in our organization.”

Cates’ first opposing goaltender could be three-time Stanley Cup champion Marc-Andre Fleury, who earned a win in his Wild debut on Saturday after stopping 23 of 25 shots against the Columbus Blue Jackets. Minnesota’s other goaltending option is Cam Talbot, who is 27-12-1 with a 2.80 goals-against average and .911 save percentage this season.