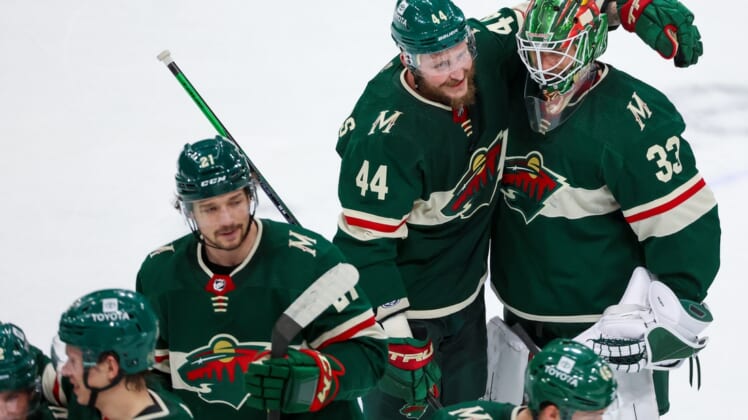 The surging Minnesota Wild are on the verge of club history while positioning themselves for the playoffs.

The Seattle Kraken are looking to extend the longest winning streak of their expansion season.

Minnesota can set franchise records for single-season wins and points with a fourth straight victory Friday night while trying to keep the visiting Kraken from a fourth consecutive triumph when the teams meet in Saint Paul, Minn.

The Wild (49-21-7, 105 points) are headed to the postseason for the ninth time in 10 years, but all eyes are on the battle for home-ice advantage against their confirmed first-round playoff opponent, the St. Louis Blues.

With a 6-3 home victory over the Vancouver Canucks on Thursday, Minnesota matched the club record for wins, set during the 2016-17 season, the same year the Wild recorded a franchise-best 106 points.

Wild forward Kevin Fiala scored two of his career-high 32 goals on Thursday. He has nine goals and seven assists during an eight-game point streak but failed to register a point while the Wild split their first two games against the Kraken — both at Seattle.

The Kraken (26-44-6, 58 points) are the fourth straight opponent Minnesota will face that is either outside of playoff position or already eliminated from contention.

“No game’s going to be easy,” forward Matt Boldy said, according to the Wild’s official website. “You gotta show up and gotta play hard.”

Seattle arrives in Minnesota having won three in a row for the first time. The Kraken scored the first three first-period goals against the Western Conference-leading Colorado Avalanche on Wednesday, then hung on to cap a perfect three-game homestand with a 3-2 victory.

“The guys are playing pretty hard for one another,” Kraken coach Dave Hakstol said.

Seattle has received an immediate impact from Matty Beniers, the club’s first draft pick and the second overall selection in 2021. With an assist against the Avalanche, Beniers has a least one point in each of his first four NHL contests.

That puts him in the same company as Wayne Gretzky, who holds the record for an expansion team by recording at least one point in his first six NHL contests with the Edmonton Oilers in 1979-80.

“I know we’re out of the playoffs, but it’s good to get some momentum going into next year,” Beniers told Seattle Sports 710 AM. “And if you can help your team do that, you’re doing well.”

Beniers’ teammate Jared McCann has enjoyed a career season while leading the club with personal bests of 26 goals and 45 points. However, he was blanked in the two games vs. Minnesota.

Seattle’s Philipp Grubauer stopped 48 of 52 shots in those two contests against the Wild and has a 2.21 goals-against average while winning three of his last four road outings. Meanwhile, backup Chris Driedger has allowed seven goals while losing his last two road starts.

Minnesota’s Cam Talbot made 21 saves on Thursday and has a 2.33 goals-against average during his current 11-0-3 stretch. He stopped 62 of 66 shots in the two games vs. Seattle, but he could give way to Marc-Andre Fleury, who is 6-1-0 with a 2.59 goals-against average since coming from the Chicago Blackhawks in a March 21 trade.