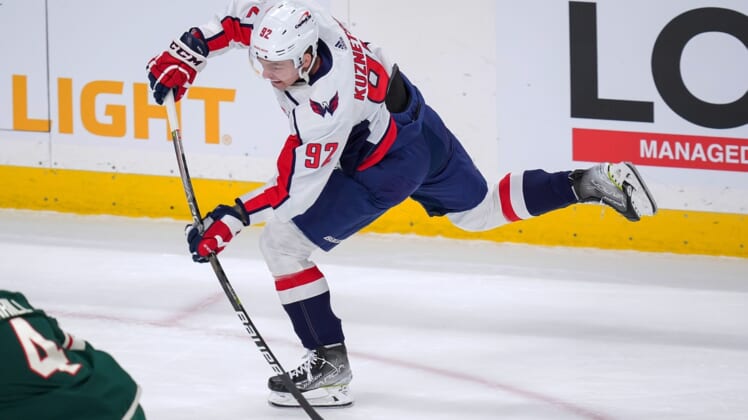 Frederick Gaudreau scored the winner in the shootout as the Minnesota Wild rallied past Washington 3-2 Saturday night in St. Paul, Minn., spoiling a record night by Capitals goaltender Zach Fucale.

Fucale set franchise and NHL records by opening his career with 138:07 scoreless minutes.

That string was snapped as Mats Zuccarello scored on a shot from the top of the right faceoff circle with 35 seconds remaining in regulation and an extra attacker on the ice, tying the score at 2-2 and forcing overtime.

Minnesota’s other tally, credited to Marcus Foligno, came on a rare Washington own goal on a delayed penalty midway through the second period.

Connor McMichael and Evgeny Kuznetsov scored for the Capitals, and Fucale stopped 21 of 22 shots.

Fucale, elevated from the taxi squad with fellow goaltender Vitek Vanecek sidelined with a non-COVID illness, broke the record for longest shutout streak to begin a career, surpassing the mark of 102:48 set by Minnesota’s Matt Hackett in 2011.

Fucale shut out Detroit on Nov. 11 in his NHL debut, then replaced Ilya Samsonov after two periods of Friday’s lopsided loss and stopped all seven shots he faced in 19:06.

Fucale surpassed Cristobal Huet’s franchise record of 80:36 scoreless, set in 2008, in the second minute of Saturday’s game before breaking the league mark.

Fucale made a highlight-reel save in the opening seconds of the extra period, diving headfirst across the crease to get his blocker on shot by Ryan Hartman, deflecting the puck out of play.

With the Capitals leading 2-0 in the second period, Zucale skated to the bench for an extra attacker as Hartman was about to be whistled for a tripping penalty.

Washington’s Carl Hagelin got the puck deep in the offensive zone and tried to make a pass back to the right point. But that position had been vacated and the puck slid 200 feet into the open net.

After a scoreless first period, McMichael netted the game’s first goal at 2:41 of the second, setting up next to the right post and tipping Nick Jensen’s shot from the point into the upper corner of the net.

Washington’s 30th-ranked power play extended the lead to 2-0 at 5:48 of the second. Alex Ovechkin sent a cross-ice pass to Kuznetsov at the right faceoff dot, and his one-timer beat Kahkonen before the goalie could move all the way across the crease.