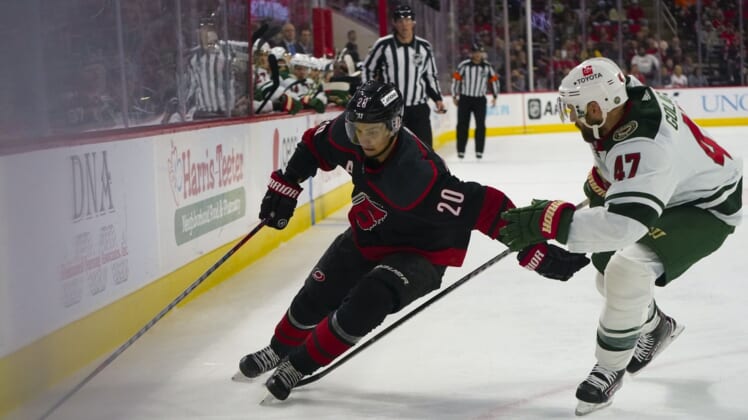 Marc-Andre Fleury made another strong impression since joining the Minnesota Wild, this time notching 37 saves in a 3-1 victory against the host Carolina Hurricanes on Saturday night in Raleigh, N.C.

Mats Zuccarello, Dmitry Kulikov and Kirill Kaprizov scored goals as the Wild (42-20-5) extended their points streak to nine games by winning for the eighth time during that span. Zuccarello also recorded an assist, giving him a team-best 49 this season.

Carolina had a six-game points streak end. The last time the Hurricanes didn’t register a team point came in a March 20 shutout loss at home to the New York Rangers.

Fleury was in his third game since arriving from the Chicago Blackhawks in a trade. The Wild are 3-0-0 with Fleury in the nets. He has given up four goals while facing 96 shots in those games.

Teuvo Teravainen scored with 6:19 remaining on a redirection of Sebastian Aho’s delivery.

Andersen was trying to follow up Thursday night’s shutout of the Montreal Canadiens. He hasn’t recorded wins in three consecutive outings since the last three games of February.

Zuccarello scored on a first-period power play to end a nine-game scoring drought. It was his 20th goal of the season. The Wild have racked up six power-play goals across the last five games.

Kulikov converted in a different type of set-up. He came out of the penalty box in the second period and six seconds later had a goal when he took Tyson Jost’s pass and powered the puck past Andersen.

Kaprizov scored in his sixth straight game, giving him a team-leading 39 goals.

Teravainen and Aho both have seven-game points streaks.

The Wild won both meetings this season with Carolina.

This latest performance was impressive for Minnesota with defenseman Jon Merrill missing the trip after suffering an upper-body injury two nights earlier.