Wild await word on Kirill Kaprizov ahead of visit to Anaheim 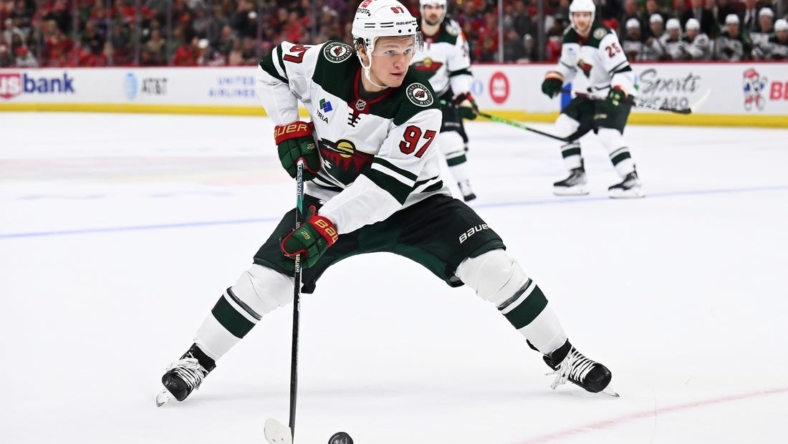 The Minnesota Wild continue a three-game West Coast road trip with a visit to the Anaheim Ducks on Wednesday. The question is whether star forward Kirill Kaprizov will be available to play.

The 25-year-old left winger was ejected in the second period of Minnesota’s 1-0 loss at Los Angeles on Tuesday after picking up a five-minute match penalty for intent to injure after cross-checking Kings defenseman Drew Doughty across the bottom of his face.

Kaprizov could be facing a suspension for his actions. A match penalty is automatically reviewed by the NHL’s Department of Player Safety.

Minnesota has been shut out in each of its last two games and brings a scoreless streak of 123 minutes and eight seconds into the Wednesday contest. The Wild can ill afford to lose Kaprizov, who leads the team in goals (eight) and points (13), for any length of time.

“It’s tough, right?” Wild coach Dean Evason said. “He’s clearly one of the best players in the league. He has the puck all the time, and last year we looked it up as far as his ability to draw penalties in the league, (and he) was top five … something like that.”

Evason was asked if he thought Kaprizov would be suspended for the game against the Ducks.

Anaheim, tied for last in the Pacific Division with the San Jose Sharks with nine points, is the only team in the NHL without a regulation win. The Ducks, who come in off a 5-3 loss to the visiting Florida Panthers on Sunday, have won three of their past five games, with two of the victories coming in shootouts and another in overtime.

All four of Anaheim’s wins have been of the come-from-behind variety, including three in which they trailed by two goals in the third period.

The Ducks found themselves in a similar situation during the Sunday loss to the Panthers, giving up a pair of goals early in the third period to fall behind 4-2. Isac Lundestrom cut the margin to 4-3 on a penalty-shot goal with 1:14 remaining, but Sam Reinhart dashed Anaheim’s comeback hopes by scoring an empty-netter.

“We’re always playing catch up,” Ducks defenseman Kevin Shattenkirk told the Orange County Register. “It’s a sign of our starts. We need to be simpler in our starts, more detailed. We’re a really good team when we put pucks in, forecheck and create our offense off of that. But our ability to commit to that is just killing us right now.

“I don’t know why we’re trying to go different ways with it and look for something different when we know we have the formula right there.”

Anaheim center Ryan Strome added, “The NHL is a tough league, and playing catch-up against any team is hard. Whether it’s a goal against or penalties, I just feel like a lot of games lately we’ve just shot ourselves in the foot.”

Ducks coach Dallas Eakins likes his young players’ resolve but agreed that they need to get off to better starts.

“I am impressed with our team’s ability — even when things aren’t going well — to stay in it,” Eakins said. “Especially in today’s game, I’m not sure you’re ever out of it, no matter what kind of lead (the opponents) have. But on the other hand, it’s certainly not sustainable to be down in games and just think you’re going to grab a couple (goals) in the last five minutes.”