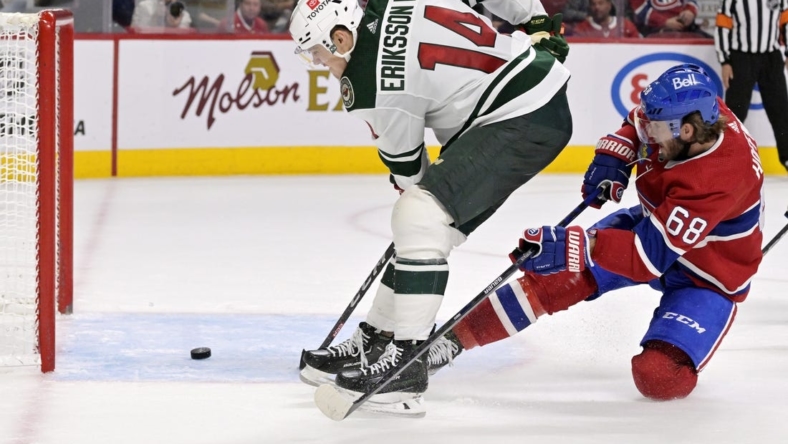 Following a successful first road trip of the season, which included a victory at Montreal, the Minnesota Wild will look to string together some wins at home.

The Wild can start while trying for a ninth consecutive home victory over the Canadiens, who will aim for a third straight road win, on Tuesday night in Saint Paul, Minn.

Minnesota overcame a one-goal, third-period deficit on Matt Boldy’s second goal of the night, then won 4-3 at Chicago in a shootout on Sunday. That capped a 3-1-1 trip for the Wild, who have seen five of their nine games decided by a goal.

“This is an extremely special group here,” Minnesota’s Mason Shaw, who recorded a goal and assist for his first career points Sunday, told the NHL’s official website.

Now, the Wild play two games at home, where they opened with three straight losses before winning 4-3 over Vancouver in overtime on Oct. 20 before heading on the road. Based on history, it would seem Minnesota has a good chance to post back-to-back home wins.

The Wild have outscored the Canadiens 40-15 during an eight-game home winning streak, dating to an 8-1 loss there in March 2011. Boldy, who already has five goals and three assists on the season, had one of each during last season’s 8-2 home victory over Montreal, which has lost four straight and 13 of its past 14 overall to Minnesota after falling 3-1 at home on Oct. 25.

However, since that loss to the Wild, the Canadiens scored 10 goals in back-to-back road victories at Buffalo and St. Louis. Christian Dvorak recorded his first NHL hat trick, while Cole Caufield and Nick Suzuki combined for three goals and three assists during Saturday’s 7-4 victory over the Blues. Montreal has won five of its first nine games this season.

The Canadiens also hope they’ve figured things out on the power play, which was 1-for-24 in the eight games before converting on two of three chances at St. Louis. One of Caufield’s two goals came with the man-advantage, and he has a team-leading seven, plus 10 points, on the season.

“I know he’s over there somewhere,” Suzuki, who also has 10 points, told the Montreal Gazette, about Caufield. “He’s always ready to shoot. His shot radius is pretty big for how big he is. Just get it over to his side.”

Beginning with that result, Fleury has a 1.95 goals-against average and .927 save percentage during his current three-start winning streak. Teammate Mats Zuccarello did not register a point against the Canadiens last week or Sunday at Chicago, but posted eight (four goals, four assists) of his team-leading 12 points in Minnesota’s four home contests.