Raiders to kick off wild AFC West race against Chargers 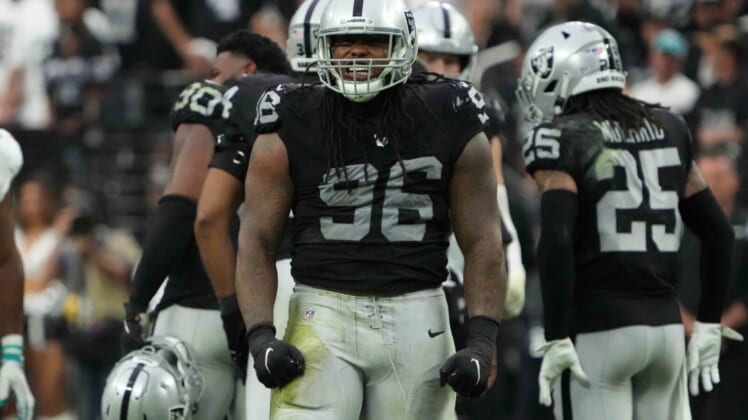 The Las Vegas Raiders play their first of six AFC West games in primetime for Monday Night Football when they take on the Los Angeles Chargers at Sofi Stadium. If should be just the beginning of a wild AFC west race.

In fact, Las Vegas plays two of their next three games against a divisional opponent before heading into their bye week, with the other being against Denver Broncos in a matchup at Empower Field at Mile High Stadium in Denver on Oct. 17. Las Vegas’ second game against the Broncos is the day after Christmas at Allegiant Stadium.

The Raiders and Broncos lead the AFC West, both with 3-0 records. The last time both teams started undefeated through the season’s first three weeks was in 2002 when the Raiders won the Super Bowl and the Broncos finished 9-7 and just missed the playoffs.

Despite being 3-0, quarterback Derek Carr, who became the fourth player to throw for 1,200 yards through the first three games, said the team does not receive any trophies at the conclusion of the season’s first calendar month.

“I’m glad that we’re off to a good start, but they don’t hand anything out after three weeks,” Carr told Evan Washburn, NFL on CBS, after Sunday’s 31-28 overtime victory over Miami.

With Las Vegas beating Baltimore, Pittsburgh and Miami, the Raiders became the first team in NFL history to defeat three teams that won 10 or more games the previous season.

Meanwhile, the Broncos defeated the New York Giants and the Jacksonville Jaguars on the road before shutting out the New York Jets last week, 26-0 in their home opener. The Giants, Jaguars and Jets are a combined 0-9 on the season.

Before Denver takes on Las Vegas in a few weeks, the Broncos will get tested with matchups against the Baltimore Ravens at home and the Pittsburgh Steelers on the road, the same format the Raiders had in its first two weeks.

Although Teddy Bridgewater is in his first season as the Broncos play caller and receivers Jerry Jeudy and KJ Hamler are hurt, the one thing that has carried the team is their defense. The Broncos’ defense ranks third in passing yards allowed and second in rushing yards allowed.

The other two teams in the division are the Chargers at 2-1 with their lone loss coming at home against the Dallas Cowboys two weeks ago, and the Chiefs at 1-2 with their losses coming against the Ravens in Baltimore and against the Bolts at Arrowhead Stadium.

Even with Patrick Mahomes leading the Kansas City offense, it’s the first time the Chiefs are under .500 and in last place since the 2015 season.

Last season, both the Chiefs and Raiders went 4-2 in their six division games, which includes splitting their season series by winning at each other’s home stadium. The Chargers went 3-3 and the Broncos went 1-5 in divisional games

The Chargers are led by first-year head coach Brandon Staley and 2020 AFC Offensive Rookie of the Year Justin Herbert, a 6-foot-6, 23-year-old quarterback.

Head coach Jon Gruden said the schedule only gets tougher as the Chargers will be motivated coming into Monday night’s game after their 30-24 win against the Chiefs.

“It’s fun to win and it’s also, you have to be realistic when you look at your schedule, what we have coming up,” Gruden told the media on Monday. “It doesn’t get much easier. The Chargers just went to Kansas City and beat the Chiefs and did it in impressive fashion. So, every week is a grind.”

Against Kansas City last week, Herbert completed 26 of 38 passes for 281 yards and four touchdowns. In addition, the defense combined to get four takeaways via two inceptions and two fumbles.

With all of the unpredictability this NFL season has brought three weeks into the year, the AFC West is expected to have a wild finish, especially with an extra game in the slate.