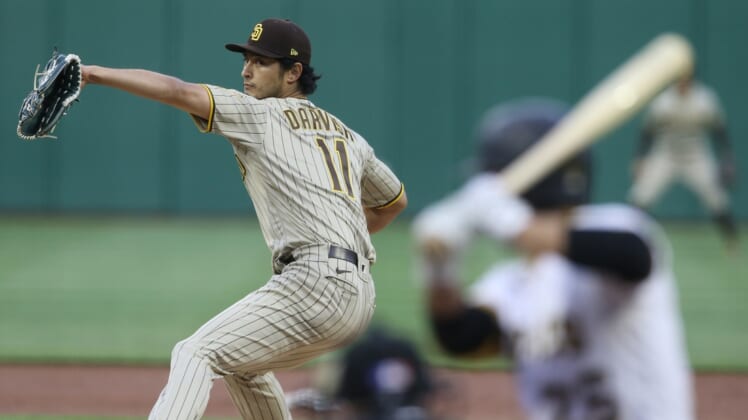 Wil Myers went 3 for 5 with a homer and matched his career high with five RBIs Monday to back right-hander Yu Darvish’s strong outing in the San Diego Padres’ 6-2 win over the host Pittsburgh Pirates.

Victor Caratini added an RBI double for San Diego, which rode a three-run sixth inning to its fourth straight win.

Darvish (1-0) picked up his first win with the Padres, allowing one run and three hits in seven innings, with one walk and six strikeouts.

Phillip Evans hit an RBI double for the Pirates, who had won two straight.

Pittsburgh starter Trevor Cahill bounced back from a poor first start. He held the Padres to one run and three hits in five innings, with two walks and eight strikeouts. That came after his debut with the Pirates, when he gave up seven runs and nine hits in four innings against Cincinnati.

In the first, Jake Croneworth led off with a single and Jurickson Profar walked, before Cahill came back with two strikeouts. But Myers’ broken bat single to shallow left-center drove in Croneworth for a 1-0 San Diego lead.

Pittsburgh tied it in the third. With two outs, Adam Frazier singled to left, and Evans followed with a double to left to make it 1-1.

The Padres regained the lead in the sixth against Oviedo.

Manny Machado drew a leadoff walk and went to second on Eric Hosmer’s chopper to Oviedo. Myers followed with his third homer of the season, to the bushes in center, for a 3-1 edge.

Tommy Pham singled to center and scored on Caratini’s double to the gap in left-center to make it 4-1.

Myers & Co. were back at it in the seventh. With one out, Profar walked. He went to second on Machado’s single to left and to third on Hosmer’s fly out to right. Machado stole second ahead of Myers’ two-run single to center, bumping it to 6-1.

In the bottom of the eighth, pinch-hitter Wilmer Difo tripled to left-center and scored on Adam Frazier’s sacrifice fly for Pittsburgh’s second run.