Why Tim Anderson is the modern-day Derek Jeter 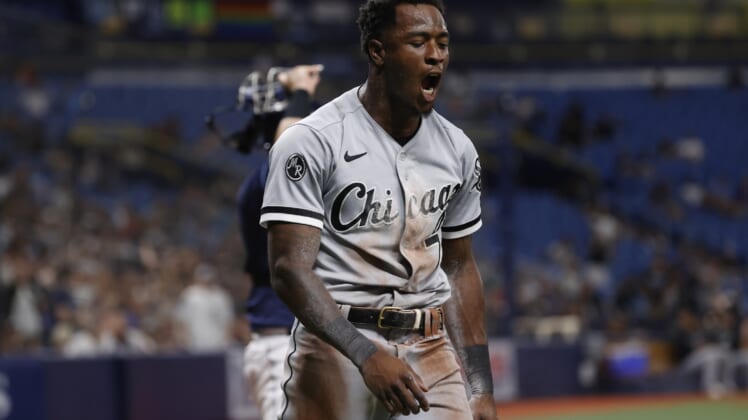 Tim Anderson has become one of MLB’s premier shortstops and is one of the faces of the World Series-contending Chicago White Sox. The 28-year-old has grown more productive and impactful with age.

The homegrown Chicago shortstop isn’t the stereotypical star player who hits 30-plus home runs a season or is among the league leaders in OPS. He’s known for being a smooth player who does a lot of the little, under-the-radar things well.

What shortstop is that reminiscent of? That would be the now former New York Yankees’ Hall of Fame shortstop Derek Jeter. Here’s why Anderson is the modern-day Jeter.

Tim Anderson and Derek Jeter are contact hitters with pop

Anderson is one of the better pure contact hitters in the sport. He has a steady swing geared towards smacking pitching into the outfield grass. Across the last three seasons, which is when he began to come into his own, Anderson is hitting a combined .320.

Hitting at the top of the White Sox’ order for the bulk of his career, Anderson has been a table setter for the sluggers behind him. Another catalyst for his success is speed. Anderson has top-level speed, as he forces infielders to throw ground balls over to first base in a jiffy, which can occasionally lead to forced and errant throws.

That speed is also utilized when it comes to swiping bags and legging out an extra base on hits behind him. Anderson is 17-for-24 on stolen base attempts this season and has produced similar stat lines in years past.

Anderson is precisely the type of hitter that Jeter was. Hitting at the top of the Yankees’ order, Jeter gave those behind him an amplitude of chances to drive in runs by means of contact hitting. Jeter was a career .310 hitter with 358 stolen bases across his 20-year MLB career.

All the while, both shortstops have the ability to blast home runs in their arsenal. It isn’t a hallmark in their careers, but the two middle infielders tend to slug out 15-plus home runs on a yearly basis. That leads to a glaring similarity between Anderson and Jeter when it comes to offensive inclinations, as well as the way what they bring to the table in that regard is perceived.

For better or worse, that’s the way decision-makers think these days. It doesn’t mean it’s right. What it does do, however, is downplay the impact that someone like Anderson has on the game.

Yes, Anderson has become one of the more publicly displayed figures in the game. That said, his skill set isn’t one of the modern-day liking. He isn’t someone who slugs at a high level; he has posted an OPS no higher than .886 and has just two seasons of an OPS above .800 on his resume.

Jeter’s career was the same deal. He finished with a career .817 OPS and only two seasons of a .900 OPS or higher to his name. Why? He was a contact hitter who made a living off grinding out base hits through the infield.

If Jeter’s prime was played in the current game, he wouldn’t have been glorified. He would’ve been generally assessed as a replaceable outlier, which is an enormous mistake. The best offenses in baseball are balanced ones with a variety of contact and power. Anderson’s offensive impact is that of Jeter.

Defense remains one of the shortcomings in Anderson’s game. Now, he’s a respectable fielder who has noticeably improved by the eye test and statistically in recent memory. For perspective, he posted -6 DRS and 26 errors across 122 games in 2019. This season he has posted 2 DRS and just six errors across 108 games. That said, he isn’t an elite vacuum, if you will.

The same was true for Jeter. There were numerous highlight reel and clutch defensive gems in his career. The eye test tells one that Jeter was a steady fielder at short with above average range. On the whole, though, he was a respectable and little more fielder. He finished his career with -165 DRS.

Fielding their positions isn’t anything that has held the pair of first-round draft selections back by any means, rather it’s a part of their games that lacks a bit. As for continuing similarities, both shortstops were called up to make an immediate impact for their team, and they went on to become one of the driving forces and faces of their teams.

The Yankees were perennial contenders with Jeter at short and the top of the order. Jeter is the face of the late 90s and early 2000s Yankees. Meanwhile, the White Sox look to be the same in the coming years with Anderson, who is the co-face of the operation alongside Jose Abreu.

MLB has a plethora of exceptional shortstops in 2021 including Fernando Tatis Jr., Trea Turner, Javier Baez, Trevor Story and many others including Anderson. But we’re talking about finding the new version of an old star, not weighing who’s the best player at a particular position.

He may not be an exact carbon copy of the Yankees’ legend, but Tim Anderson is the closest thing in the 2021 game to Derek Jeter.