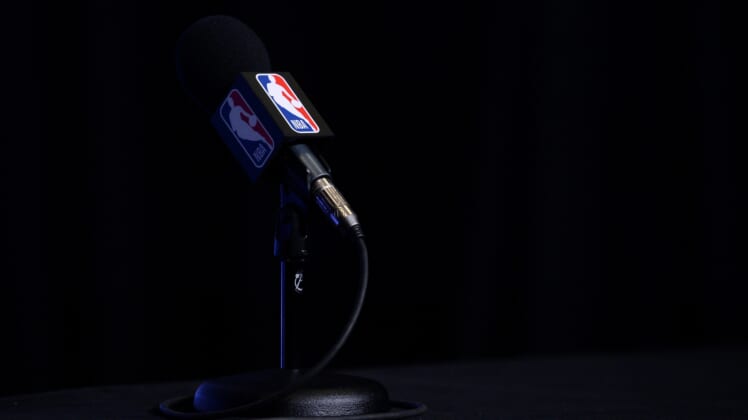 The NBA on Friday will hold a league-wide conference call between the league office and players to discuss the current pandemic-related work stoppage and a potential return to the season.

The 2019-20 campaign was suspended all the way back on March 11 after Utah Jazz star center Rudy Gobert tested positive for COVID-19. That’s now almost two months ago.

As the NBA charts a path to a return in some form, Walt Disney World in Florida and the Las Vegas Strip are being considered as options for the Association to resume its season in a bubble.

This is complicated by the fact that the United States remains the epicenter of the COVID-19 pandemic with nearly 1.3 million cases and 76,700-plus deaths as of early Friday afternoon.

For the NBA, it’s about more than those raw numbers. As ESPN’s Ramona Shelburne notes, the league is using a combination of science, psychology and politics to guide its potential return.

On and of itself, this could be an issue. States control how quickly their economies are opening amid the pandemic. Some Governors have expedited a return to normalcy with strict social distancing guidelines. Others remain closed outside of non-essential businesses.

For the NBA, this brings about a whole different problem.

“According to sources, teams believe they would need local officials to allow gatherings of up to 50 people to practice again and gatherings of up to 200 to play games again, likely at home practice facilities or Disney World in Orlando, Florida. This could theoretically accommodate families and be seen as a semi-bubble, a compromise where players wouldn’t necessarily be subjected to such harsh social isolation or surveillance measures,” Shelburne reported.

A case study here would be Nevada, a state potentially set to host the NBA once its returns (if it does). Governor Steve Sisolak announced on Thursday that the state would begin the first stage of opening up this weekend.

On the surface, that’s good news. Restaurants and most retail outlets will be able to open with a 50% capacity and strict social distancing orders. This includes employees being required to wear masks. Nail salons and barbershops will also be able to open under the same guidelines.

Unfortunately, the Vegas Strip will remain closed until at least the second stage of opening up on May 30. Meanwhile, social gatherings are still limited to 10 people.

When asked about casinos in particular opening up, Sisolak did not seem too confident that it would be any time soon. That will be left up to the Nevada Gaming Board. As of yet, it has not come to terms on a process that would lead to casinos reopening.

This is a specific problem for the NBA in that the most-current plan includes games being played and players being housed at Mandalay Bay and its other properties on the strip.

Could the NBA ask for an exception from the Nevada government when it comes to this? Would the Association even venture down that road?

The other issue here is an ability to gain widespread rapid testing. As of right now, this is not available to the general public. The NBA has joined in other professional leagues in determining that it will not take tests from those at a higher risk within the general population.

“In order to do testing, you need the machines, you need the cartridges, you need the swabs, you need reagents, you need personal protective equipment, and a shortage of any one of these makes it difficult,” said former U.S. Surgeon General Vivek Murthy, who has advised the NBA on the virus. “Which is why you’ve seen backlogs in so many parts of the country.”

Three NBA teams are opening up their facilities for limited individual workouts on Friday. That’s 10% of the teams after the Association indicated that teams could reopen on May 8 depending on local ordinances.

This might seem to be a step in the right direction. But it’s clear that the league powers and the players’ union are playing everything close to the vest nearly two months after the season was suspended.

Whether it’s in Florida, Vegas, or another location, it sure the heck does seem like the resumption of the NBA season is ways away. That’s the harsh reality of the situation.