Why the Golden State Warriors need to keep Dragan Bender 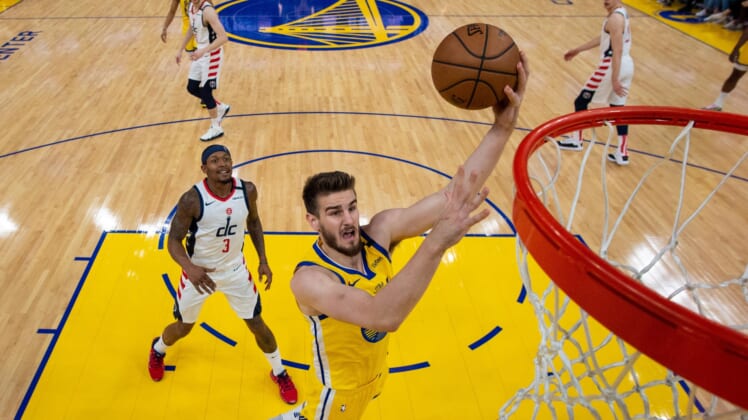 Dragan Bender was a scintillating player overseas. However, his career hasn’t panned out and the Golden State Warriors could be his last shot in the NBA.

The big picture: Although the 22-year-old Bender has been on three teams in his short career, the former fourth overall pick is worth a shot for the Warriors.

Bender flew too close to the Sun

As an 18-year-old coming over from Croatia in 2016, Bender had a lot of expectations. The year prior, the New York Knicks seemingly drafted a star in Kristaps Porzingis. Another fourth overall pick, Porzingis was one of the few bright spots in New York, averaging 14 points, seven rebounds and almost two blocks per game.

The Phoenix Suns wanted their own Porzingis and thus drafted Bender. In highlight videos, Bender displayed a similar skillset as Porzingis: the former could shoot, drive and play defense. Being 18 made him an even more interesting prospect. However, none of that materialized in Phoenix.

Along with an inconsistent role, having three different head coaches in three years didn’t help either. As such, before the 2019-20 season, Bender signed with the Milwaukee Bucks, seemingly for a new start. After a few stints in the G-League, he was waived halfway through the season.

Bender’s trip to the Bay Area

Looking for another new start, Bender went to Golden State and the Warriors signed him to two 10-day contracts before the season shut down. Initially, he was signed as a reclamation project to see how he would play with Stephen Curry and the Warriors’ established system.

Although he only played nine games – three starts – Bender looked to be progressing as:

If the Warriors do sign Bender to a longer contract, at least he will play in an organization with stability. Having a supportive coach in Steve Kerr and playing in a system that will take advantage of his size (7-foot-0, 225 pounds) and skills can only do wonders for his growth.

Not only that, but able to play and surround himself with All-NBA talents like Curry, Klay Thompson and Draymond Green can help him grow exponentially. Considering he’s only going to be 23 years old when the 2020-21 season starts, having a full offseason to know the Warriors’ system and work with those aforementioned players can only help him.

The bottom line: The Warriors have nothing to lose by keeping Bender

In all, the Warriors would be wise to keep Bender for a few years. He was clearly overmatched in his first few years with the Suns but as he grows older, he can be a serviceable big man with the potential to stretch the floor.

Additionally, he can be the big man the Warriors need behind Kevon Looney or Marquese Chriss that can either start or come off the bench. At this point in his career, he’s not expected to earn more than the minimum, even though he is relatively young and is technically not a veteran yet.

Bender is in a very unique situation: he’s only 22 and yet, he only has a year or two before falling out of the NBA completely. For him, this could be a way to jumpstart his career. For the Warriors, signing Bender could be uncovering a diamond in the rough. If all goes well, the Warriors could have a solid contributor on a potential playoff or even championship team.

However if Bender shows no noticeable progress even with the Warriors, he would be one of the bigger busts in recent history.