Why the Falcons should consider blockbuster trades of Julio Jones, Matt Ryan 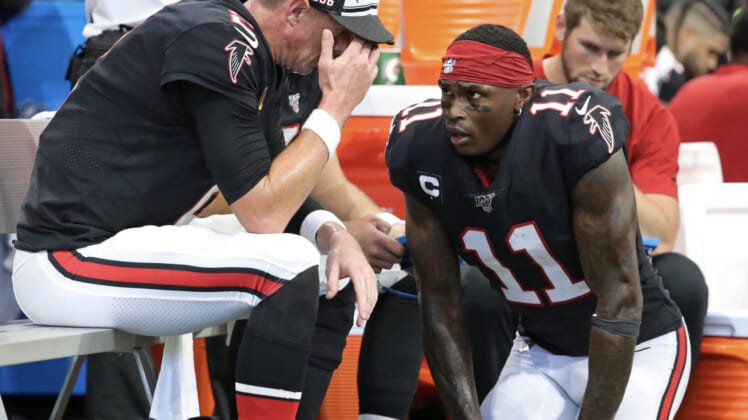 The Atlanta Falcons are coming off yet another sorely disappointing 7-9 season under head coach Dan Quinn. This team started a horrendous 1-7 before a great run in the second half of the campaign.

This gave the Falcons and their fans false hope. False hope that contention could be the name of the game in 2020. False hope that Quinn was still the long-term answer on Atlanta’s sideline.

Now, with the Falcons preparing for a big offseason, I’m here to say it’s time for owner Arthur Blank and Co. to blow this whole thing up.

The why: In a top-heavy NFC, Atlanta is not contending for anything of substance over the short term. It does not have the young talent, its core is aging and multiple teams have passed this squad up.

Harsh reality: Without much young talent, the Falcons ceiling is incredibly low. And as we saw during the first half of the 2019 season, their floor is also pretty low.

The salary cap: According to Spotrac, Atlanta currently ranks in the bottom four of the NFL in cap room. Quick fixes in free agency are not coming this team’s way.

The NFC: This is the most important aspect of the argument. There’s no logical reason to believe Atlanta can even contend for a wildcard spot in 2020.

The Julio argument: Once Atlanta is prepared to contend with the top teams in the NFC, Jones will be well past his prime. The team can find value for him right now.

Jones to the San Francisco 49ers for a first-round pick in 2020, Dante Pettis and Ahkello Witherspoon: There’s no reason to believe that Kyle Shanahan wouldn’t salivate over the idea of reuniting with Jones. He’s actually directly talked about it. Moving Jones to the defending NFC champs might be a bitter pill to swallow, but the Falcons add two talented young players at positions of need and a first-round pick in return.

Jones to the Las Vegas Raiders for a first-round pick in 2020 and Derek Carr: Atlanta could very well look to swing a trade for a stopgap option at quarterback and delve into finding a longer-term option later. Carr is known to be on the outs in Vegas. Raiders head coach Jon Gruden just recently went big-game hunting for a receiver last spring. If the Falcons were to decide to move on from Jones, this is the deal that could make the most sense.

Moving on from Mr. Ryan: Trading Julio Jones would be one thing. Dealing your franchise quarterback would hint at a complete rebuild. Again, we check in on what a Ryan trade might look like.

Ryan to the Indianapolis Colts for a first-round pick in 2020 and second-round pick in 2020: What’s the going rate for a quarterback entering his mid 30s? We’d like to believe the Falcons could still get a first rounder and change for the former MVP. And if the team were to put him on the block, Indianapolis makes the most sense. It has been linked to other big-name quarterbacks to replace Jacoby Brissett. Yielding a first-rounder and one of their two second-round picks could make sense for the Colts.

Ryan to the Washington Redskins for Dwayne Haskins, a third-round pick in 2020 and a first-round pick in 2021: Is Washington’s brass sold on Haskins after an up-and-down rookie season? We’re not too sure. What we do know is that those in charge in D.C. right now are not the ones that drafted him. The Skins could pull a complete 180 and move Haskins, their third-round pick and a future first for Ryan. Atlanta gets a potential franchise quarterback and two valuable selections, one of which they can use this April.

Ryan to the Chicago Bears for Mitchell Trubisky, two second-round picks in 2020 and a second-round pick in 2021: The theme here might be for Atlanta to find another long-term option to replace Ryan, one of which could be a struggling quarterback in Trubisky. Add in three second-round picks, and this is magnified even further. For the Bears, they get a true franchise quarterback in hopes of riding a championship-caliber defense to a Super Bowl.

NFL Draft: Let’s say for argument’s sake that Atlanta is able to move Jones for a first-round pick in 2020 and Ryan for another first-round pick (and change), things would be set up swell for this squad come April. For now, this is how we envision the draft unfolding for Atlanta with its current slate of picks.

Vic Beasley is a free agent and will likely leave once March comes calling. Takk McKinley has struggled making a major impact after being a first-round selection himself back in 2017. After that, Atlanta’s leading returning sack getter is Grady Jarrett with 7.5 from a season ago. In Gross-Matos, the Falcons get a pro-ready edge rusher with true Pro Bowl upside.

As noted before, Desmond Trufant has regressed in recent seasons. He’s now set to embark on his age-30 season. It’s time for Atlanta to get some more new blood in there at cornerback. Hall likely would have been a top-15 pick if he didn’t suffer a devastating ankle injury six games into his senior season. Hall would be a value pick at a need position.

We still like what 2018 first-round pick Calvin Ridley has done with Atlanta. One of the team’s few star youngsters, the Alabama product has put up nearly 1,700 yards with 17 touchdowns in his first two seasons. Even then, getting someone of Pittman’s talent in Round 3 would be too hard to pass up on. The 6-foot-4 pass catcher would work perfectly with Ridley in the post Julio Jones era.

Outside of what Atlanta does in the draft, the suggestion here is that the team move on from its past by trading Ryan and Jones while releasing Freeman.

If you’re not improving in the NFL, you are not doing it right. A false hope of contention with an aging roster in a budding young conference makes absolutely no sense. The Super Bowl window in Atlanta is completely closed.

Ryan and Jones are still in their primes. The Falcons could get a whole bunch for them. While it might constitute giving up on the 2020 season, it would be the best long-term bet for owner Arthur Blank and Co.