Why Raider Nation is Divided over Derek Carr 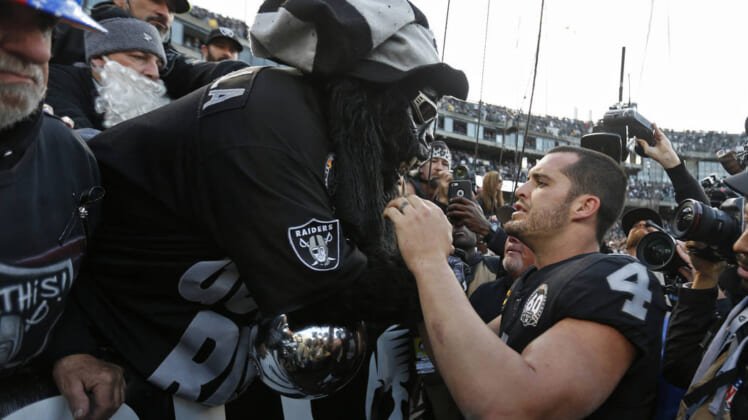 In trying to understand why the debate over Derek Carr divides Raider Nation so much, our Publisher attempts his hand at a little dime-store psychology to explain the rift and mentality behind it.

Derek Carr, or not to Derek Carr – that is the question.

While we don’t know for sure if Jon Gruden and Mike Mayock are actually asking that question, for the second year in a row, Raider Nation’s fans seem to be divided into two camps on the future of the quarterback with the Las Vegas Raiders.

Now, before you go absolutely anaphylactic on me, this is not me trying to generate “clicks” or the inner-former Chargers fandom of my youth popping out on you. This is an actual desire to try and understand why Derek Carr evokes such a visceral response from the NFL’s greatest fans.

This is going to get a little psychological, so take your vitamins and read through with some courage to get through the scientific part and it will make sense. It’s an interesting phenomenon and just might help you understand the other side a bit better.

First, though, a caveat: throughout two years of the “Carr debate,” I have been steadfast in my belief Derek Carr is a very good NFL quarterback and deserved more time. He got his second year with Gruden in 2019 and questions remain. Despite this, I have not changed my belief Carr will be under center in Las Vegas in a Raiders uniform. Before you call me a “hater” or a “stan” for what I write, there are two years of radio shows to prove I have been consistent.

As someone who never reads Psychology Today, starting to research this column by reading through it was an interesting task. What was I looking for?

I wanted to find the answer to why the really good human being and talented Pro Bowl quarterback Derek Carr is so staunchly supported by some (almost to a fault sometimes), and so reviled (often at a personal level that is frightening) by others. Never in my half-century on earth have I seen an athlete illicit such a response who is leading a clean, virtuous, and successful life.

Let’s start with the reasoning why this man, on this team, generates the amount of discussion and passion on a daily basis.

Over the last 18 years, the Raiders organization has had a horrific track record with quarterbacks. After the Rich Gannon-led Raiders marched to the Super Bowl in 2003, it’s been an almost Cleveland Brownesque parade of starting signal-callers for the Silver and Black. The list is found below, but until Derek Carr in 2014, the Raiders revolving door at the sport’s most important position was embarrassing. A complete generation of fans within Raider Nation grew up in that mess. Every year the promise of a new QB turned to misery and the unknown.

That means an average fan in their early 20s knows the misery of the lean quarterback years until Derek Carr came on the scene in 2014. Since that time, Carr has brought a level of performance and consistency not seen in almost a quarter-century of Raiders football. That’s a big deal, and for many fans, all they know.

Conversely, grizzled veteran fans in Raider Nation are old enough to remember the Ken Stabler and Jim Plunkett eras. Even younger Generation X Raiders fans had Jeff Hostetler and Gannon. For them, the lean quarterback years are a deep scar that may have healed somewhat but it’s a reminder of how bad things had become. They too were excited at what they saw out of Derek Carr through 2016 before his injury. This group of fans, though, lived and experienced the true greatness of the Raiders which was full of one key ingredient in addition to consistently great quarterbacks: winning.

Yet the Raiders move into Year 7 of the Derek Carr era and have not won anything. They’ve made one playoff game (Carr was hurt and did not play) in that span during what has otherwise been a forgettable time on the field. No, a quarterback can’t play defense, play special teams, or coach. They get more credit than they deserve when a team wins, and more blame than they should when they lose. That’s just reality in the NFL.

Here comes the psychology of the Carr debate for fans: I propose those who defend Carr and want him to remain are operating under the interdependency theory.

Raider Nation and the Interdependency Theory on Derek Carr

For fans who are convinced (and daily argue vigorously), the Raiders can’t do better than Derek Carr at this point in time, I believe this is where they are at. They feel the benefits of Carr at QB far outweighs the cost. This is exacerbated by their precondition of having bad quarterbacks or a revolving door for the past 20 years. Why would they leave a good thing when they had it so much worse in the past? To them, Derek Carr is the only stability at the position they’ve known so moving on wouldn’t be prudent, in their minds.

On the other hand, those who would like to see the Raiders improve on Carr also are adhering to the more updated version of the interdependence theory known as the “investment model.”

In the investment model, three factors play in a person’s evaluation of if it’s still advantageous for them to stay in a relationship, all from Psychology Today:

I have no formal psychological training, and a few hours or research doesn’t make me an expert, but I believe I’ve stumbled across the root of this argument and disagreement amongst Las Vegas Raiders fans.

It’s simple: those in favor of not finding a better option than Carr at quarterback see no reason to move on. They are interdependent on the only quarterback who has shown the consistency and ability to win some of the time. For 20 years they endured the “bad girlfriend/boyfriend.” Now, they have a great girl/guy who doesn’t treat them badly despite having faults. According to the interdependence theory, they feel it would be a risk to try and improve on what they already see has good value.

For those ready – and really eager – to move on from Derek Carr as the quarterback with the Las Vegas Raiders, they’ve calculated using the investment model and they believe it’s time to upgrade. To them, they are starting to see more value in “quality alternatives.” They calculate the investment in Derek Carr and psychologically aren’t happy with the results – fair or not. They might have invested heavily in the relationship in the past, but are reluctant to do it moving into the future.

I did throw in the “girlfriend/boyfriend” thing there thanks to my colleague Moe Moton who used it as an appropriate analogy. We’ve all been in relationships in our lives where you’re afraid to leave or you are willing to leave if something better comes along. I believe Raider Nation is exactly there psychologically on Derek Carr.

Again, the purpose of this column isn’t to advocate one point of view or the other. Instead, I was trying to do my best to understand both points of view.

In the end, I do believe this helps me (and hopefully you if you made it all the way here!) understand the strong, unwavering passion on both sides of the debate.

No matter what Raider Nation believes in the Derek Carr debate, it’s really only two men who will control the fate of the player and position for the Raiders.

I wonder if they’re in the interdependency or investment model groups?

We should find out soon.