Why Notre Dame can get back to College Football Playoff 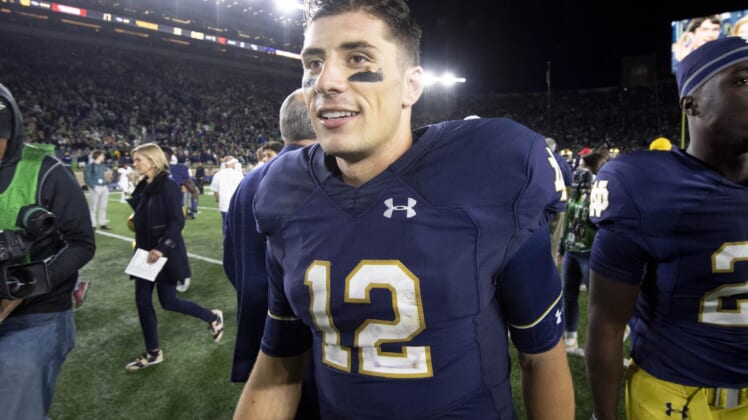 The Notre Dame Fighting Irish have a chance to get back to the College Football Playoff in 2020 after falling short of the goal last season.

The skinny: Brian Kelly has one of the best programs in the nation, and the Irish finished strong last year. They can take another step forward in 2020, but a few key things obviously need to happen for that to take place.

Biggest reason to believe: The most crucial key to Notre Dame having any chance at all to make the Playoff in 2020 is the return of quarterback Ian Book, who chose to come back for his senior campaign, rather than declare for the NFL Draft.

He’s one of the nation’s best passers and has elite potential if he can cut out rookie mistakes.

Offensive weapons: Though the Notre Dame offense lost some key playmakers from last year like leading rusher Tony Jones, star tight end Cole Kmet and top receiver Chase Claypool, this team has plenty of talent and depth to replace them.

Oh, and we’d be remiss if we didn’t point out that all five starting offensive linemen from last year are returning in 2020. The run game should continue to be successful, and Book will have outstanding protection up front.

Defense is strong: The 2020 Notre Dame football team may not have a legendary defense as its centerpiece, but overall this unit is experienced and has the potential to be outstanding.

The bottom line: The Notre Dame football program has enough talent to get into the College Football Playoff in 2020.

Whether it can challenge the likes of the Alabamas, Clemsons and Ohio States of the world remains to be seen. But this program is going strong under the leadership of Brian Kelly, who has done a great job bringing talent to South Bend.