Why Hunter Renfrow Is the Key to Raiders Offensive Season 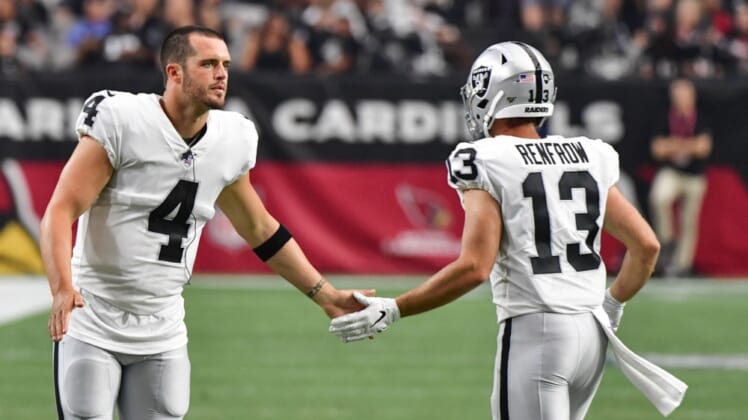 While excitement builds around the Las Vegas Raiders top draft pick Henry Ruggs III and his blinding speed, the second-year slot receiver Hunter Renfrow might be the key for the 2020 season.

Lost in all of the hype and excitement over the Las Vegas Raiders spending their top draft pick on speedy Alabama wide receiver Henry Ruggs III, is the impact his presence will have for the team’s returning offensive weapons. With Hunter Renfrow, Darren Waller, Tyrell Williams, Foster Moreau and Josh Jacobs in the mix, the impact of a more complete offense with Ruggs means more opportunity for everyone. And the receiver who should benefit most is Hunter Renfrow.

Renfrow had a very strong rookie campaign despite an injury scoring four touchdowns on 49 catches for 605 yards. While he showed flashes of being the wideout Jon Gruden and Mike Mayock thought he could be, his role in 2020 might just be the key on offense for a team looking to make a playoff run.

With Ruggs, Waller, and Williams a handful for defenses to handle, Renfrow will get more and more opportunities in routes underneath and in key red-zone situations. With sure hands (just four drops last season) and a knack for getting open despite his size and lack of burning speed, Renfrow can make a living getting open in one-on-one coverage being an important outlet for quarterback Derek Carr.

Averaging over 12 yards per catch last season, Hunter Renfrow is not your vertical threat but he eats and eats big between five and 15 yards. His receiving yards downfield before the catch are 6.2 and he gains on average another 6.1 after the catch. With the league now more hip to the presence of last year’s comeback player of the year (unofficially) Darren Waller, Renfrow will get those favorite matchups as his faster and more vertical teammates require attention from opposing defenses.

While Derek Carr’s brother David Carr predicted Renfrow will lead the league in touchdowns in 2020 (yes, a little bias there), it’s not impossible to see Renfrow get near 60 receptions or more this year.

To think Renfrow will go from just four touchdowns to nearly 20 (usually around the range the league leader at the position hauls in) is a stretch but double-digits is a distinct and perhaps almost certain possibility.

The Raiders and Carr struggled mightily in the red-zone last season – especially in the second half. This should be money for Hunter Renfrow this season as defenses deal with the possibility of Jacobs running the ball and the three-headed monster of Waller, Ruggs, and Williams perhaps also available in certain red-zone packages.

As NBC Sports Bay Area’s Josh Schrock points out, Renfrow found his groove the second half of 2019 and his continued growth will be huge for Las Vegas this season.

“After some early-season struggles that saw him fail to find ways to get open consistently as he showed he could do at Clemson, the Raiders took the reins off Renfrow and he became one of the best slot receivers in the NFL during the second half of the season,” Schrock said. “From Week 7 on, Renfrow caught 35 passes for 491 yards and four touchdowns.”

The other key observation with Hunter Renfrow is his continued close relationship with Carr. They’ve become fast friends and Renfrow told me this past spring Carr has been a huge reason why he’s progressed so fast.

Renfrow and Carr are two peas in a pod – even during this weird offseason. The relationship and “feel” between a quarterback and receiver is often underrated. These two appear to be developing a very deep and special bond that should flourish on the field this season.

While the world watches the Raiders vertical game vastly improve and produce more than in recent years, Hunter Renfrow will be making a living underneath and in short-yardage situations where scores and first downs matter.