The Boston Red Sox took the MLB world by surprise this season, snatching the American League Wild Card and later advancing to the AL Championship Series. This came after back-to-back disappointing seasons and a mostly reserved offseason.

Boston got back on track in 2021 to the point where they’re a legitimate competitor in the AL once again; the mere fact that they took the Houston Astros to six games in the ALCS is impressive in and of itself. The problem? Them returning to the playoffs next season is a complex matter due to a variety of factors at play.

Here’s why the Red Sox have a hazy path forward.

Prior to even discussing the Red Sox’ roster, the imminent threat to Boston building on its 2021 campaign is their division, the AL East.

Yes, Boston upset the first-place Tampa Bay Rays in four games in the AL Division Series. On the other hand, two of the games ended in walkoff fashion and the Rays’ roster is a well-oiled machine. Offensively, Tampa Bay has sluggers who haven’t approached their prime like Brandon Lowe, Austin Meadows, Randy Arozarena, and Wander Franco. This offense is accompanied by a well-versed and versatile pitching staff.

The New York Yankees have made the playoffs in each of the last five seasons. They’re one of the better teams in the AL on a yearly basis thanks to their amplitude of power hitters. Now they have a sturdy starting rotation with upside as Nestor Cortes and Jordan Montgomery made strides in 2021. Looking to finally break through and win the AL, the Yankees could be poised for a lively offseason.

The Toronto Blue Jays won 91 games and came in fourth place in the AL East. They have an overwhelming offensive attack with a plethora of young stars. Meanwhile, they finally have a dynamite starting rotation with the acquisitions/revivals of Robbie Ray and Jose Berrios over the last two years.

Ironically, Boston finished ahead or beat all of their divisional foes in the playoffs. That said, 2022 and beyond is a different story than 2021. Some of those teams have room for growth in the standings, specifically Toronto. The Yankees were one win away from hosting the Red Sox in the AL Wild Card Game, and the Blue Jays were one win against Boston away from edging them out of the playoffs. 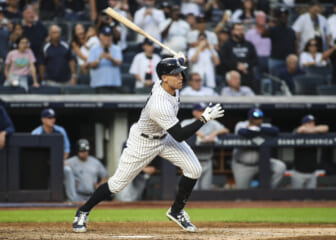 Manager Alex Cora has an offense that has been one of the best units in MLB since their 2018 World Series championship. That offense will likely take a hit or two this offseason, as J.D. Martinez and Kyle Schwarber hit the free agent market. Martinez has become Boston royalty while Schwarber had an electric year at the plate for both the Red Sox and Washington Nationals, who the former acquired him from at the MLB trade deadline.

Surely, the Red Sox could lose both players and still have a firing offense. The likes of Xander Bogaerts, Rafael Devers, Alex Verdugo, Kike Hernandez, Hunter Renfroe and Bobby Dalbec would still be present. Talented youngsters Jarren Duran and Jeter Downs could at least adequately take the outgoing veterans’ places in the order.

On the other hand, the Red Sox would be banking on youth to put up mammoth numbers and/or the remaining pieces of their core all having All-Star caliber reasons. While that may sound a bit superficial, the Red Sox got through most of the 2021 season with a subpar starting rotation thanks to their offense literally raking from start to finish. Again: they barely made the Wild Card Game, as they had the same record as the rival Yankees.

As for the starting rotation, the 2022 grouping is in much better shape than it was entering 2021. The Red Sox get a healthy Chris Sale and maybe Tanner Houck, who was a stabilizing force down the stretch, can build on his 2021 success.

Simultaneously, Eduardo Rodriguez is coming off a rough season while Nathan Eovaldi, Nick Pivetta and Garrett Richards have been up and down in the regular season. Sale is also 32.

Postseason experience, a proven offense and respectable starting pitching gives the Red Sox a chance at being a playoff participant in 2022. The point is Boston isn’t in a situation where they’re a shoo-in to get back to the ALCS.

The AL East is arguably the stiffest division in MLB from one-to-four. To be fair, the Red Sox play a role in that, as they’ve been a staple in the five-team cluster for the better part of the last six seasons. In the present, though, the Red Sox are on equal footing with four teams in their division with little upside working in their favor.

For the most part, Garrett Whitlock, Darwinzon Hernandez, Hirokazu Sawamura, Josh Taylor and company were smooth sailing in the late innings. But bullpen fortune can be volatile, especially if a starting rotation struggles to provide length.

This season was a great and sentimental ride for the Red Sox, as it brought back images of their 2018 World Series run. However, reliving those moments again next season is difficult to foresee.