The New York Yankees — once again — enter the 2022 MLB season in search of a way to finally win the American League pennant.

The Yankees remain a legitimate threat to win the AL. That said, their roadmap to success has minimal, if any margin for error. Furthermore, it’s dangerously reliant on the progression of young and/or homegrown starting pitchers.

The Yankees have sported one of MLB’s best offenses in each of the last five seasons, and they will continue to do so in 2022. Aaron Judge, Giancarlo Stanton, DJ LeMahieu and Rizzo headline a productive, power-heavy lineup. Inconsistency and injuries are its Achilles heel.

Any positive development is offset by an equally effective negative. For instance, Judge and Stanton were healthy for the bulk of last season and consistently hit at an All-Star level. At the same time, Gleyber Torres had an anemic year at the plate and LeMahieu hit just .268 after being quite possibly the best leadoff hitter in the sport the previous two seasons.

Meanwhile, the Yankees have a handful of volatile everyday players. When healthy, Aaron Hicks is an excellent center fielder with power from both sides of the plate, but he struggles to get on base and has been held back by injuries.

Joey Gallo is a multidimensional player, but he hit .160 with the Yankees last season. Anthony Rizzo has declined a bit in offensive impact. The recently acquired Donaldson has left much to be desired at the plate of late.

This group possesses a great deal of slug, sound fielders and All-Stars, but their identity remains unchanged. Many of the same faces remain, which is fine. The problem is what they have to be accompanied by to win the AL.

Gerrit Cole is the best starting pitcher in the AL. Outside of the prolific right-hander, the reliability of manager Aaron Boone’s starting rotation is in question from both a health and proficiency standpoint.

Now, starting pitching is what kept the Yankees upright when they were ravaged by injuries last season. Nestor Cortes Jr. and Jordan Montgomery were plausible forces while Jameson Taillon turned a corner in the second half. Moving forward, though, it’s difficult to get a gauge on what the Yankees have at their disposal on the pitching front.

Cortes has made just 16 career MLB starts. Montgomery is coming off his first full season as a starter since 2017 and has dealt with a bevy of elbow injuries. Taillon is coming back from an ankle injury. Luis Severino hasn’t pitched a full season since 2018. Domingo German begins the 2022 season on the injured list with a shoulder injury. Top pitching prospects Clarke Schmidt, Luis Gil and Deivi Garcia have had their moments but never done enough for the Yankees to stick with them.

Many of the aforementioned pitchers were once highly touted prospects in the Yankees’ system. Last season, the Yankees got everything they could from those who were healthy. It was impressive, but it also has to be the basis for their collective performance next season.

The likes of Cortes, Montgomery and Severino have to provide length. In other words, they have to finish off hitters, induce weak contact and be the best version of themselves.

Related: Anthony Volpe ready to take over as the next New York Yankees great?

As previously alluded to, the Yankees’ offense is going to be a plausible force but little more. Their bullpen should at least remain a sturdy force with Aroldis Chapman, Jonathan Loaisiga, Michael King and Wandy Peralta leading the way. In short, New York’s success comes down to rotation progression. 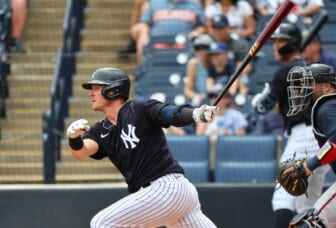 Yes, an extra team has been added to the playoff field in both the American and National League. That said, the Yankees still have to get through three high-level teams in their division, which doesn’t include the Chicago White Sox and improved nature of the AL West.

The Yankees need something different to blossom, and starting pitching is their best bet. They’re deep in numbers with this unit, but that has been the case for the last five years. Now they officially need at least three of their homegrown arms to pitch up to their billing and in some cases build on their 2021 success. It’s daunting, especially since there aren’t any more veteran safety nets.

The Yankees have been the same team for five years. Something has to change for them to stand a chance in a stacked AL.