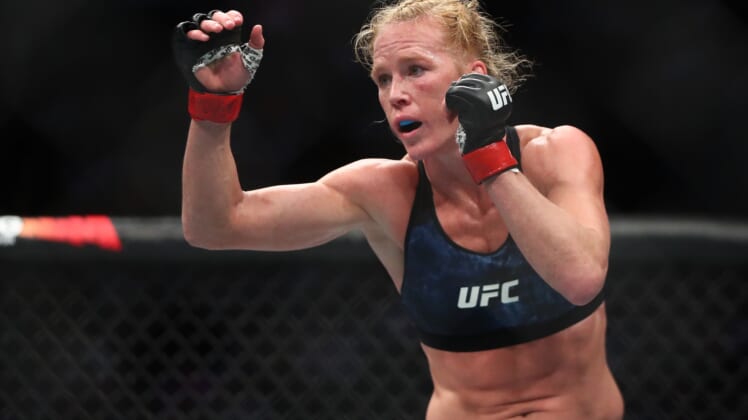 Former UFC champion Holly Holm put on a clinic against Irene Aldana on Saturday, Oct. 3, at Fight Island. She showcased a brutal performance for the Fight Night’s main event.

Her martial-arts display was perhaps one of the most outstanding performances she has executed in recent memory. Aldana went on to make a statement via Instagram in response to her loss and Holm’s performance:

“Today things didn’t go my way. First of all I want to apologize to my corner because we had a very specific fight plan that I could not execute. I felt that something was wrong with my left foot; it wasn’t responding since the beginning of the fight. No excuses, I still know that I faced the best version of Holly, and I congratulate her for winning. I am proud to know that I am competing with the best in the world. This is how this is. This is how sport is: We win, we lose. But as I’ve always shown, the only thing that’s next for me is to train harder, improve and come back stronger than ever. Thanks to all the people who have shown me their support in good and bad times. Thanks to my sponsors for their incredible support always! Ready for what’s next.”

Holm’s speed, pressure and aggression against Aldana led her to receive a unanimous decision victory. With a dominant win over a promising up and comer, who’s next for The Preacher’s Daughter?

The rematch to make

One fight that makes sense is a rematch against Germaine de Randamie, who also gained an epic victory that same night via submission in the third round against Julianna Peña. Both Holm and de Randamie are no strangers to each other, having fought at UFC 208 back in 2017.

Holm lost via decision, so a redemption rematch for her makes sense. Holm even mentioned in a post-fight interview that she believed that a GDR rematch was “always an option.”

Both fighters seem to have only gotten better since their last meeting in the cage. A rematch between these two top contenders, who both have their eye on a second chance at the belt, would be epic.

If the rematch takes place, the winner would surely be in line to face the champ, Amanda Nunes. GDR went the distance with Nunes at UFC 245, losing the fight to ‘The Lioness’ via decision on Dec. 14, 2019.

In comparison, Holly Holm was eliminated by Nunes via a first-round knockout, on Jul. 6, 2019, at UFC 239. Both women have losses they hope to avenge, and if they get past each other, they will have the opportunity to do that and possibly become the next bantamweight champion in the process.