Who is Baylor QB Jacob Zeno? 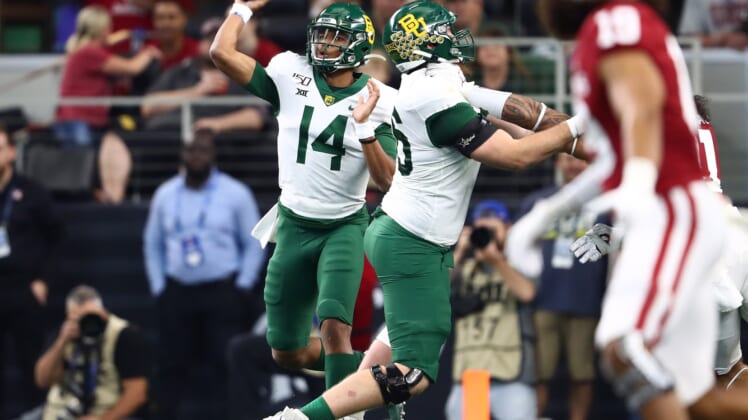 There’s a moment in every college football season when an unheralded player comes off the bench in a monumental game and becomes a legend. Baylor Bears third-string quarterback Jacob Zeno had that moment in Saturday’s Big-12 Championship Game.

Of course, Zeno’s football story started before he stepped onto the field as Baylor’s third-string quarterback and delivered a heroic performance. Just as he took the gridiron for Baylor’s biggest game of the year, he was also an unheralded recruit.

The native of Texas played high school football at John Jay High School in San Antonio, Texas. Just over a year before he led Baylor’s offense to a fourth-quarter comeback against No. 6 Oklahoma, Zeno was a five-hour drive away leading his high school team to a winning record.

The 2019 season was meant to purely be an opportunity for Zane to watch from the sidelines, work with the coaching staff and develop. It’s a plan the Bears stuck to all season, until Saturday when a concussion forced starting quarterback Charlie Brewer out of the game and second-string quarterback Gerry Bohanon struggled.

Rhule needed a spark. Baylor’s conference title hopes and a shot at playing in the College Football Playoff depended on it. So, he turned to Zeno to make his collegiate debut in the fourth quarter down by 10. Zeno took the field with a national audience watching and all of the pressure on his shoulders – the freshman delivered.

Zeno delivered the fourth-quarter comeback. He threw his first touchdown pass on an 81-yard touchdown strike to make it a one-score game, then led Baylor’s offense down the field for a game-tying field goal with three minutes left.

A true freshman found a way to turn a 10-point deficit late in the fourth quarter against No. 5 Oklahoma into a tie game. While Baylor ultimately fell short in overtime, Zeno’s heroic efforts will be the first chapter in what could be an incredible career.