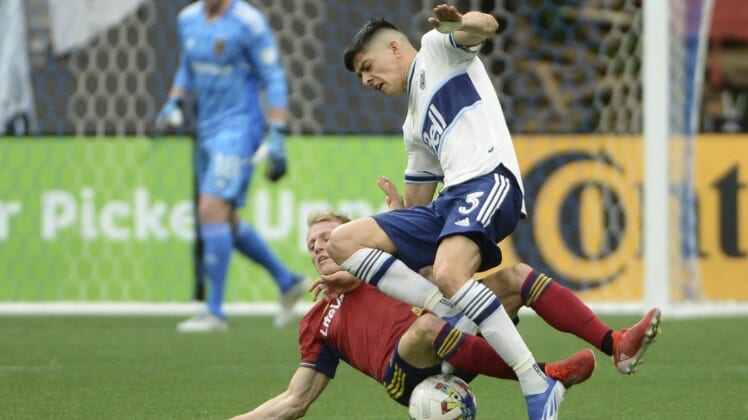 Ryan Gauld scored on a penalty kick in second-half stoppage time and the Vancouver Whitecaps continued their strong run of play at home by defeating Real Salt Lake 2-1 Saturday in the lone Major League Soccer match of the day during the international break.

Ranko Veselinovic also scored for the Whitecaps (5-7-2, 17 points), who moved past Cascadia rivals Portland and Seattle in the Western Conference standings and within a point of the playoff line. Goalkeeper Cody Cropper made three spectacular saves.

Vancouver improved to 11-2-3 at home since returning to BC Place midway through last season after having been forced to play exclusively in the U.S. during much of the COVID-19 pandemic because of restrictions at the Canadian border.

Justin Meram scored the lone goal for RSL (7-4-4, 25 points), which had a three-game winning streak snapped.

The deciding penalty was awarded after RSL’s Aaron Herrera took down Luis Martins with a sliding tackle just inside the top left corner of the 18-yard box. Herrera was issued a yellow card, his second of the game, and was sent off.

Gauld put the penalty into the upper right corner of the net as RSL goalie Zac MacMath guessed the wrong way.

Vancouver took a 1-0 lead in the 31st minute. Jake Nerwinski’s long throw-in from the right wing sailed to the top corner of the 6-yard box, where Florian Jungwirth flicked a header toward the front of the net. Veselinovic was able to get positioning on a defender and outstretched his right leg to get his toe on the ball before it hit the ground, redirecting into the far side netting from about 3 yards out.

Cropper made a diving save on Sergio Cordova’s header in the 52nd minute.

Less than a minute later, an RSL long ball from midfield was chested down by Vancouver’s Ryan Raposo at the top left corner of the 18-yard box. But Meram snuck behind him to gain possession of the ball, dribbled to the top corner of the 6-yard box bit and fired a low shot past Cropper.

In the 61st minute, Cropper made back-to-back saves, first on a low shot from Jefferson Savarino from 25 yards, then scrambled back into position to block Cordova’s close-range attempt on the rebound.