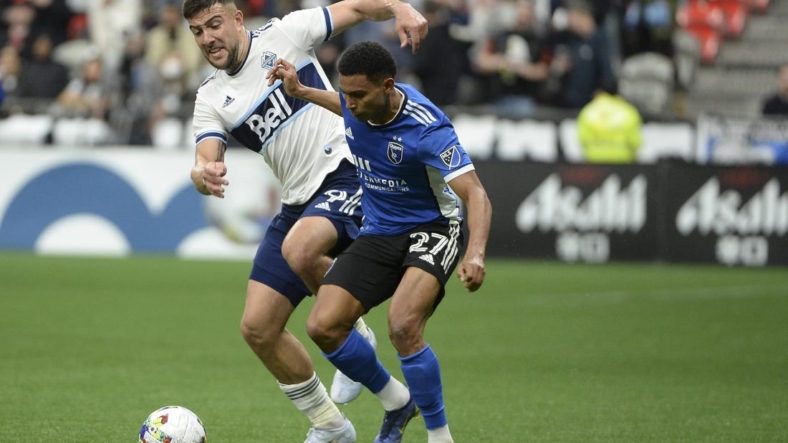 The Vancouver Whitecaps badly need a victory on Sunday night against the host San Jose Earthquakes, but the location of the match could make that a tough task.

Vancouver is just 1-5-8 all-time against the Earthquakes in San Jose as it enters the crucial contest. The lone time the club captured three points was in a 3-2 win on Aug. 25, 2018.

The Whitecaps (9-12-7, 34 points) are in ninth place in the Western Conference and are coming off a dreadful 3-0 home loss to Nashville SC on Aug. 27.

Vancouver will also be without leading scorer Lucas Cavallini, who was ejected for intentionally stepping on the head of Nashville’s Alex Muyl. The red card meant an automatic suspension for Sunday’s match and the league is weighing a longer suspension.

At midweek, Cavallini (eight goals) expressed regrets over his actions, while the Whitecaps are just trying to bounce back.

“We need to restore our pride, doing everything in the next six games that we can,” Vancouver coach Vanni Sartini said. “If we can’t make (the playoffs), OK, but at least we don’t want to be thinking about ‘OK, we gave up.’ It looked (against Nashville) that we were giving up, and that is unacceptable to be honest.”

San Jose (6-12-9, 27 points) is in a more dire situation than the Whitecaps. The Earthquakes are in 14th and last place in the West and are just 1-5-2 over their past eight matches.

“At this point in the season, anything besides three points is really frustrating,” Earthquakes goalkeeper JT Marcinkowski said. “We obviously know that we only have seven games left now. I think this was a big opportunity but then there’s another one next Sunday against Vancouver.”

San Jose has allowed the second-most goals (55) in the league and the club made a move to shore up the back end by signing Peruvian defender Miguel Trauco through the 2023 season with an option for 2024. Trauco, 30, was a starter in the 2018 World Cup.

Ebobisse scored two goals when San Jose and the Whitecaps played to a 3-3 tie on May 14 at Vancouver. The Whitecaps are 2-0-3 in the past five overall meetings.