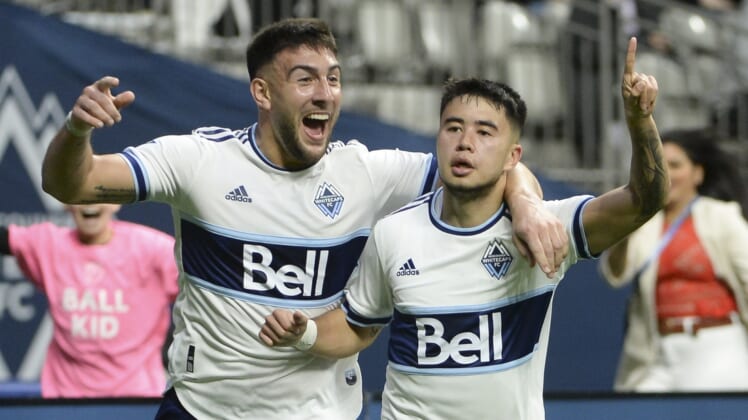 Since being able to return to B.C. Place last August after the easing of pandemic restrictions at the U.S.-Canada border, the Vancouver Whitecaps have the best home record in MLS at 8-1-2.

That one loss, however, came against the Portland Timbers, the same club the Whitecaps will play host to Saturday night.

It will be the first game of the season in the three-way Cascadia Cup rivalry between Portland, Seattle and Vancouver.

The Whitecaps (1-3-1, 4 points) are coming off their first victory of the season, a 1-0 decision over visiting Sporting Kansas City as Ryan Raposo, making his first start of the season, scored the lone goal.

“I would say it’s another must-win,” Whitecaps coach Vanni Sartini said. “We say that every time that we need to build our run at B.C. Place and so there’s always pressure when we play at home to make points. Then it’s also one of our local rivals, it’s a Cascadia derby, so there’s also this added flair to that.”

The Timbers (1-2-3, 6 points) will look to finish with 11 players for the first time in their past three matches.

Pablo Bonilla received a red card in first-half stoppage time in a 3-1 loss to the visiting Los Angeles Galaxy last weekend, the second straight game — and the third this season — a Timbers player was sent off.

Despite the Galaxy also losing a player to a second yellow card in the second half, the Timbers were unable to rally.

“We talked about this before the game,” said Timbers defender Bill Tuiloma, who scored on a free kick but also conceded an own goal against Los Angeles. “We’ve got to control ourselves. The reaction that Pablo (Bonilla) had was unacceptable, hurting the team. Being in a situation like that, 10 men down, is very hard. We got the red card last game.

“(Coach Giovanni Savarese) was telling us to be careful with the referees, and now we know this season the referees are on to the players and how we react. This is just unacceptable for us.”