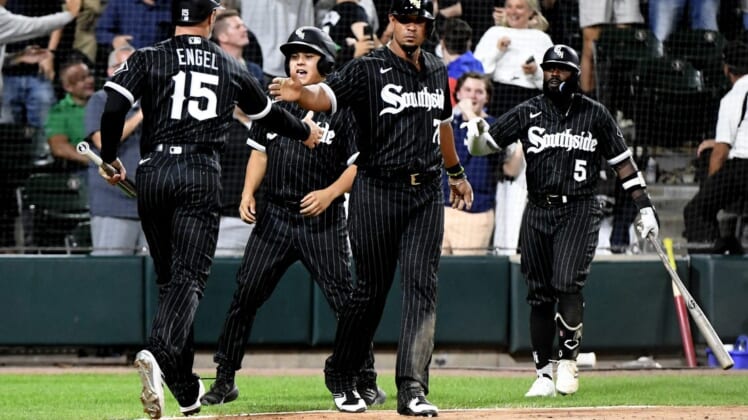 Yoan Moncada had a two-run single to cap a four-run, two-out rally in the eighth inning that lifted the Chicago White Sox to a 4-2 win against the visiting Houston Astros in the opener of a four-game series on Monday night.

Astros starter Jose Urquidy left with two outs and a man on first with a two-run lead in the eighth, but Rafael Montero (4-2) allowed back-to-back, two-strike doubles to Andrew Vaughn and Eloy Jimenez to tie the score 2-2.

After back-to-back walks loaded the bases, Moncada lined a single up the middle to score two more for a 4-2 lead.

White Sox starter Johnny Cueto (5-5) allowed two runs (one earned) and six hits in eight innings. The veteran right-hander struck out three and walked one while pitching at least six innings for the 15th time in 16 starts this season.

Liam Hendriks pitched the ninth for his 26th save.

Jose Abreu, the American League leader in hits, had two for the third straight game for the White Sox, who have won four in a row.

Urquidy gave up one run and six hits in 7 2/3 innings, striking out four with no walks.

Alex Bregman stretched his hitting streak to seven games with an RBI double in the first inning for the Astros, who were trying to win their fifth in a row.

An error on a potential double-play grounder in the first inning opened the door for the Astros to take an early 2-0 lead.

Mauricio Dubon, a late replacement at shortstop for Jeremy Pena (sore neck), delivered a leadoff single. Yuli Gurriel then sent a ground ball to Josh Harrison at second and he misplayed it, putting runners on first and third.

Yordan Alvarez lifted a fly ball to center field to drive in Dubon for a 1-0 edge. Bregman followed with an RBI double to left-center field.

Bregman, who is 10-for-23 during his hitting streak with three home runs and nine RBIs, popped out with the bases loaded to end the fifth.

Cueto retired the final seven batters he faced beginning with an inning-ending double play with two aboard in the sixth.