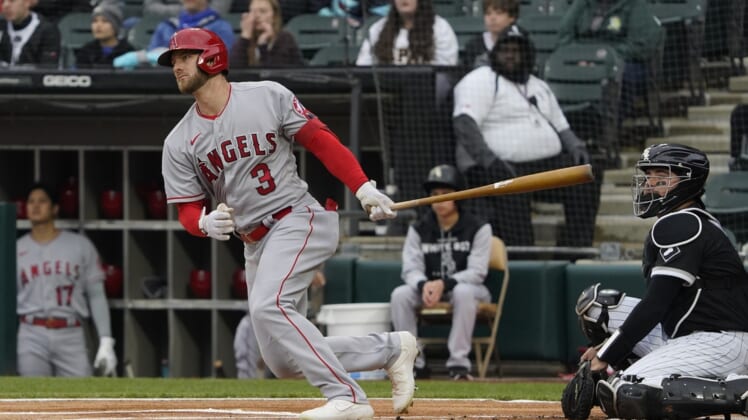 Velasquez (1-2) was one strike away from completing six innings, but with a 2-2 count on Mike Trout, plate umpire Larry Vanover halted the game because of rain. After a one hour and one minute delay, Trout resumed his at-bat against reliever Tanner Banks, who retired Trout on a ground ball on his first pitch.

Velasquez gave up four hits, struck out six and did not walk a batter.

Anderson’s home run leading off the bottom of the first inning and Robert’s three-run homer in the fifth inning accounted for all of Chicago’s runs. Anderson, A.J. Pollock and Josh Harrison each had two hits for the White Sox.

Four White Sox relievers combined to throw the final 3 1/3 innings against an Angels team that ranks No. 1 in the American League in several offensive categories.

The Angels, whose winning streak ended at six, finished with six hits, including two by Tyler Wade.

Angels starter Jose Suarez’s very first pitch of the game — a 92-mph fastball — was hit over the fence in right-center field for a home run by Anderson, giving the White Sox an early 1-0 lead.

Suarez (0-2) settled down after that, keeping the White Sox off the scoreboard until the fifth.

Meanwhile, Velasquez was sharp. He held the Angels scoreless through five innings on four singles. The Angels didn’t put two runners on base at the same time until there were two out in the fifth, but he retired David Fletcher on a flyout to end the threat.

Suarez and the Angels were still in it going to the bottom of the fifth, down 1-0, but the White Sox broke through for three runs, all three scoring on the homer by Robert.

Harrison led off with a double and Anderson reached on an infield single when his ground ball hit the third base bag, Harrison staying at second. Robert followed with his home run, hitting a changeup off the plate over the fence in right-center.

The next two batters also reached base for Chicago, and Suarez was finished for the day.