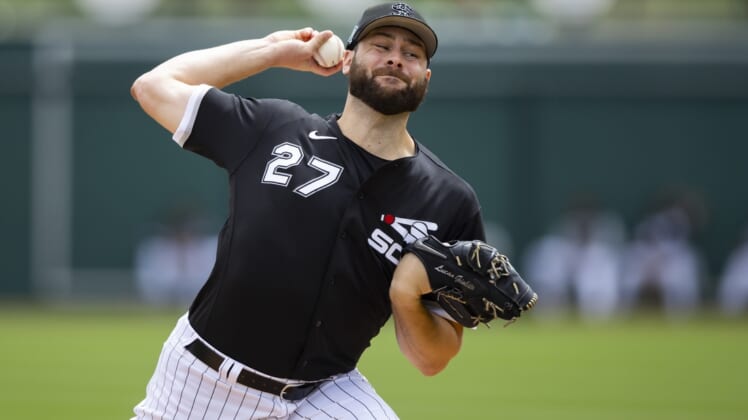 Chicago White Sox right-hander Lucas Giolito is in line to return from the injured list Sunday, which would lead to a road start against the Minnesota Twins in the finale of a three-game series, manager Tony La Russa said.

Giolito was scheduled to pitch in a simulated game Tuesday at the teams’ spring training complex at Glendale, Ariz. He has been on the injured list since he came away from his season-opening outing with an abdominal strain.

Also participating in Tuesday’s simulated game is White Sox outfielder AJ Pollock, who could return as early as Friday at Minnesota. Pollock has been in the IL with a hamstring injury and could end up getting a few at-bats with Triple-A Charlotte.

Giolito gave up just one hit over four scoreless innings April 8 in the season opener against the Detroit Tigers. In seven major league seasons, six with the White Sox, he is 42-38 with a 4.17 ERA and has finished in the top 11 of the American League Cy Young Award voting each of the past three seasons.

Pollock, in his first season with the White Sox, after a late spring trade from the Los Angeles Dodgers, was 4-for-7 in his first two games with Chicago. He is a career .282 hitter over 11 seasons with the Arizona Diamondbacks, Dodgers and White Sox, with 126 home runs and 415 RBIs.