White Sox have Tony La Russa in mind ahead of finale vs. Royals 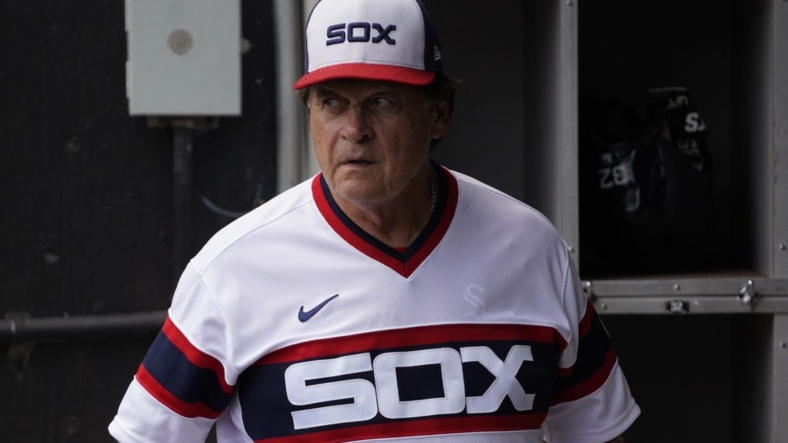 The Chicago White Sox will try for their first series victory in nearly three weeks on Thursday without manager Tony La Russa, who remains out indefinitely as he undergoes medical testing in Arizona.

La Russa, 77, missed the White Sox’s 9-7 loss to the visiting Royals on Tuesday as well as Chicago’s 4-2 win over Kansas City on Wednesday.

The Hall of Fame skipper remains on the minds of the White Sox, who snapped a five-game losing streak on Wednesday to set up a rubber match with the Royals.

“Tony showed up every day and went to work, even at his age, and he worked hard. He worked really hard,” Chicago reliever Kendall Graveman said. “For me, seeing that as a player, it meant a lot to me that he would show up every day and put in his best effort and really get after it every day.”

“He cares about the clubhouse, the players. We love him. I love him,” Cairo said. “I played for him, I work with him, and he’s got so much knowledge about the game.”

Chicago, the defending American League Central champion, enters September third in the division, five games behind the Cleveland Guardians and 3 1/2 games behind the Minnesota Twins, who will visit the White Sox for three games this weekend.

Timely hitting, including solo home runs from AJ Pollock and Elvin Andrus, as well as exquisite control propelled the White Sox on Wednesday. Chicago pitching did not walk a batter while fanning 10.

Kansas City has homered five times in the series but may be without catcher Salvador Perez on Thursday. He was scratched from the lineup shortly before the Wednesday game as he dealt with back tightness.

Perez, who is tied with Bobby Witt Jr. for the team lead with 19 homers, is day-to-day.

“He was trying to stay loose,” Kansas City manager Mike Matheny said of Perez. “The trainers thought there was a chance he might be able to come back if he got an opportunity. But just kind of sat around long enough that we figured it would probably be best just to give him the night.”

Right-hander Daniel Mengden is expected to start for the Royals as he joins the team from Triple-A Omaha.

Mengden (0-0, 2.08 ERA) will make his fifth regular-season appearance and first start for the Royals in his first major league action since June 25. Mengden, who pitched to a 4.55 ERA in 21 games (17 starts) with Omaha, gets the call as Kansas City opts to provide Daniel Lynch with extra rest before his next start.

In two career starts against the White Sox, Mengden is 1-0 with a 5.40 ERA, having allowed two home runs in 10 innings.

Chicago will counter with veteran right-hander Johnny Cueto (6-6, 2.98 ERA), who encountered a blip in his most recent start, ending a sterling stretch. Cueto allowed seven runs and five hits in five innings on Friday in a 7-2 home loss to the Arizona Diamondbacks, snapping a string of 10 straight quality starts.

It was the longest single-season run of consecutive quality starts for the White Sox since Mark Buehrle had 10 straight in 2005.

Cueto is 1-3 with a 3.68 ERA in six career starts against the Royals. He got a pair of no-decisions in two starts versus Kansas City this season, pitching to a 1.50 ERA in 12 innings.