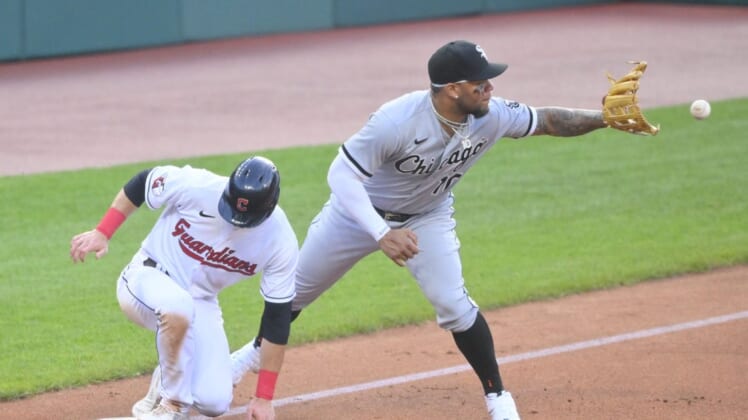 Giolito (6-5) pitched 6 1/3 innings and allowed five hits, one unearned run and one walk. The veteran struck out five batters.

He came into the game with a 1.93 ERA in 11 career starts against Cleveland. That trend didn’t change on Wednesday.

Veteran Liam Hendriks earned his 18th save with a scoreless ninth inning.

The teams split the four-game series 2-2.

The Guardians knocked out Giolito in the seventh when Franmil Reyes singled and Nolan Jones walked. Manager Tony La Russa brought in reliever Reynaldo Lopez, who induced a fielder’s choice to Owen Miller for the second out. Pinch-hitter Andres Gimenez’s hard grounder was booted by second baseman Josh Harrison, as Reyes scored.

It snapped an 18-inning scoreless drought by the Cleveland offense.

The Guardians got out of a jam in the seventh. After Tim Anderson singled and Moncada walked with two outs, Robert hit Anderson in the back with a line drive for the third out. Robert, 3-for-4 with a run, was credited with a single.

Guardians starter Aaron Civale was taken out of the game after one inning with right wrist soreness. He allowed two hits and no runs.

He was replaced by Eli Morgan, who pitched two shutout innings.

The White Sox finally got to the Cleveland bullpen in the sixth inning. Hentges walked Yoan Moncada — the first free pass of the game — and allowed a single to Robert. Jose Abreu followed with a double off the wall in right field, which scored Moncada with the first run of the game. Robert came home on an RBI grounder by Andrew Vaughn for a 2-0 advantage.

Left fielder Eloy Jimenez was taken out of the game after making a running catch to end the sixth inning. He limped off the field and replaced by Adam Engel.