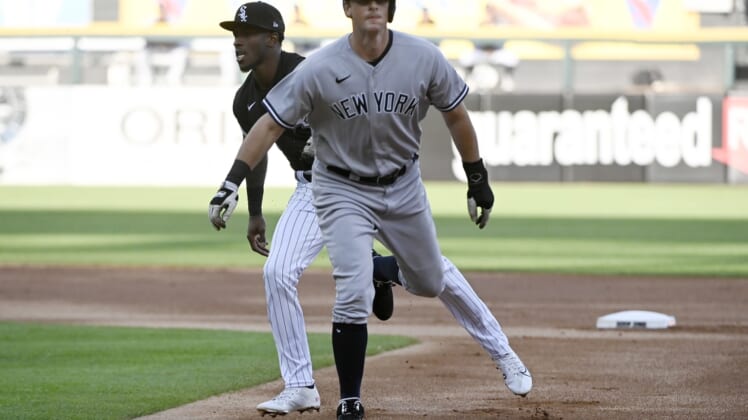 Luis Robert had two hits and two RBIs, including the walk-off single in the bottom of the ninth, to lift the host Chicago White Sox to a 3-2 victory over the New York Yankees on Saturday night.

Yoan Moncada homered for the second time in three games for the White Sox.

Outscored 25-11 in the first two games of the series, the White Sox prevailed in a nail-biter as Dallas Keuchel outdueled Yankees counterpart Jordan Montgomery before the game came down to the bullpens.

Chicago allowed runs in the eighth and ninth but regrouped to break through for the winning tally against Aroldis Chapman (0-1). Tim Anderson delivered a one-out single, his third hit of the night, and Moncada walked before Robert capped off the night as Chicago ended a two-game losing streak.

Liam Hendriks (1-2), who blew a five-out save opportunity, was the winner, allowing one run on one hit in 1 2/3 innings with one walk and three strikeouts.

Chicago opened the scoring in the first inning, as Robert lined an RBI single to center field to extend his hitting streak to 12 games.

The White Sox added to the advantage two innings later. Moncada, who made his season debut Monday after opening the season on the injured list with an oblique injury, drilled Montgomery’s first delivery of the third inning into the center field bleachers.

Joe Kelly allowed an RBI single to Giancarlo Stanton in the eighth to help the Yankees pull to within 2-1. Stanton was 3-for-4.

New York broke through for the tying run on an RBI sacrifice fly in the ninth as Hendriks blew the save. Isiah Kiner-Falefa had two hits.

Anderson logged his sixth three-hit game of the season for Chicago, while Moncada and Robert each had two hits.