A late return from New Orleans following a season-opening win means a likely day off for the Philadelphia 76ers on Thursday.

That extends the drama surrounding All-Star point guard Ben Simmons another 24 hours and leaves open the possibility Simmons could suit up for Friday’s game with his teammates.

The Sixers are scheduled to host the Brooklyn Nets in Philadelphia’s home opener on Friday. Simmons didn’t play in the first game of the regular season on Wednesday as he was suspended for conduct detrimental to the team for refusing to participate in a practice drill.

Without him, Tyrese Maxey scored 20 points as the fill-in point guard and the Sixers beat the Pelicans by 20. 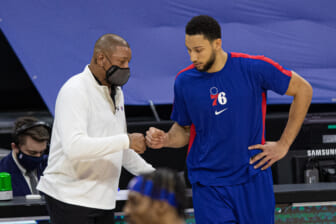 “(The players) have been normal, the only abnormal part is when they have to talk to the media afterwards and they’re asked questions (about Simmons),” coach Doc Rivers said. “It’s about playing basketball and growing together, and they’ve done a great job of that.”

“Our focus was always like zeroed into this game, but I think that just comes from a lot of guys having added opportunity here,” said Tobias Harris, who had 20 points and 12 rebounds. “And really trying to figure out ways that they can maximize that type (of) opportunity.”