What will it take for the Los Angeles Chargers to make Justin Herbert the starter? 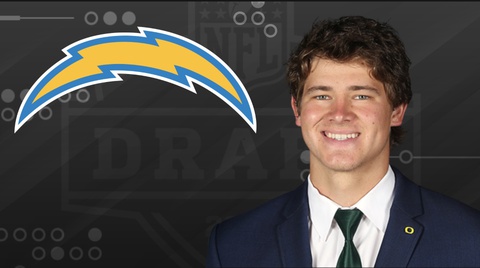 The Los Angeles Chargers used the No. 6 overall pick of the 2020 NFL Draft to select quarterback Justin Herbert out of Oregon. Teams that select quarterbacks that early in the draft typically don’t keep them on the bench for long. So when can Chargers fans expect to see the big-armed youngster under center?

Tyrod Taylor is the starter. For now.

Head coach Anthony Lynn has spoken about Taylor in glowing terms since well before the draft. And it sure seems like the Chargers are committed to keeping him under center as long as possible.

Lynn and Taylor have history together from their shared time in Buffalo. The veteran was extremely effective as the starter for the Bills. He started 43 games in three seasons. With the Bills, Taylor completed 62.6% of his passes, averaging 7.2 yards per attempt while tossing 51 touchdowns and just 16 interceptions.

Recently, tight end Hunter Henry expressed excitement about playing with Taylor. The Chargers have to feel like they have a shot at making the playoffs with the veteran under center.

Justin Herbert will get his shot if/when the Chargers are eliminated?

Per Allbright: “if/when Herbert gets moved into the starting lineup, I suspect it’ll be a midseason thing. Chargers head coach Anthony Lynn has loyalty to Tyrod Taylor stemming back to their time with the Buffalo Bills. I suspect they’ll play Tyrod until they’re eliminated.”

What this boils down to is that the Chargers are almost certainly hoping Herbert doesn’t play a single snap in 2020. It makes sense. He’s extremely talented but just as raw.