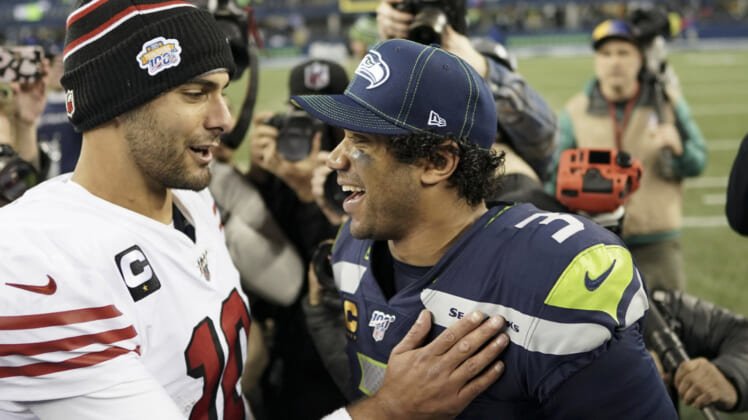 The NFC West is top-to-bottom the best division in the NFL. Last season, each NFC West team had the best record in the conference for their rank in the division. With just one more win for the Los Angeles Rams, there would have been three NFC West teams in the playoffs.

And of course each team’s individual ranking is dragged down by the six brutal division contests throughout the year. Even the division’s lowest members, the Arizona Cardinals, posted a respectable 4-5-1 record against the rest of the NFL outside of the division.

Looking ahead to next season, the NFC West promises to be a bloodbath yet again. There’s an argument to be made that every team in the division has a path to the playoffs. I will outline the steps along this path for each team, working my way down through last year’s standings.

Fresh off a 13-3 season and Super Bowl loss, the San Francisco 49ers should make the playoffs next year. They have plenty of things going for them:

Of course, this time last year the Rams were fresh off a 13-3 season and Super Bowl loss, with a dominant running game, an offensive genius head coach, and borderline-elite quarterback Jared Goff and Defensive Player of the Year Aaron Donald.

The Rams are a cautionary tale: The NFC West is wild, and the 49ers should not rest on their laurels, instead making moves to ensure they remain on top.

If the Niners do all this, along with a few other key moves (resigning free safety Jimme Ward should be a priority, align with drafting or signing a cornerback to replace the inconsistent-at-best Akhello Witherspoon), they will find themselves back on track on the “Quest for Six.”

The Seahawks only made the playoffs because of Russell Wilson last year. Outside of Wilson, their roster was not talented or particularly healthy.

Luckily for them, Wilson is a magician. He put in an MVP-level performance to carry Seattle to an 11-5 record and playoff berth. The most important thing for the Seahawks to do is enable Wilson to do his thing: give him more offensive weapons and let him take the reins early and often, not holding him back with conservative play-calling as they have in the past.

They took a step in the right direction offensively with the signing of veteran tight end Greg Olsen, who will join Will Dissly to make a talented tight end group. But the Seahawks need improvements throughout their roster if they want to earn another playoff berth, so Olsen should be just the first step.

On the other side, to be a true contender, the Seahawks desperately need to address their defense, which is far removed from its glory days as the “Legion of Boom.”

Luckily, they have nearly $45 million in cap space, and there is d-line talent for the taking this offseason, so they will have options, and should look to acquire at least one of the following players:

While a pass rush would go a long way to helping the defense, the Seahawks also have other holes to address to make a jump to the next level.

With these changes, Wilson’s magic should be enough to take them back to the playoffs — he’s only failed to do so once in his 10 year career.

As mentioned above, last season was obviously a huge disappointment for the Rams, missing the playoffs a year removed from their Super Bowl run. But the team still has much of the talent from the 2018 squad, and could easily return, if not to the Super Bowl itself, at least to the playoffs.

To do that, the Rams really have one big problem to fix: their offensive line. The Rams offensive line was woeful at times last season, and their struggles in the trenches were largely responsible for their lack of success as a team.

Defending the defense: Further highlighting how offensive struggles were the main source of the Rams woes, the Rams defense was actually better last season than in their Super Bowl season. They allowed less total yards and total points, and its not just because teams didn’t have to chase their offense — they allowed nearly one whole yard less per play as well.

The Rams roster has one gaping hole, literally and metaphorically. If they fill it this offseason, they should be set to make another playoff appearance, and potentially another Super Bowl run.

The Cardinals last year were bad, but they showed potential.

However, the Cardinals finished 5-9-1, and one of the main reasons why is pretty clear: their defense was terrible.

Obviously for the Cardinals to make the playoffs next season, their defense will have to improve. They should also look to support Murray by adding offensive talent, especially at wide receiver and offensive line.

With the right tools, there’s a chance Murray could take the fabled “second-year jump” and propel the Cardinals to be in the playoff hunt as early next year. Otherwise, here’s their path to the playoffs:

Russell Wilson holds one-man strike: The Cardinals best chance to make the playoffs would rely on Wilson, who has already announced he will vote no on the NFL and NFLPA’s new Collective Bargaining Agreement, sticking to his guns and holding out until a better agreement is reached.

Kittle joins WWE: It has long been rumored that legendary tight end Rob Gronkowski would join the WWE after his playing days. Kittle announcing his retirement to join Gronk in the ring would go a long way to helping the Cardinals reach the playoffs.

Sean McVay, coach coach: McVay’s offensive genius is key to the Ram’s success, and many other teams have tried to poach his assistants and steal the magic. Seeing this, and sick of losing all his assistants, McVay will resign as Rams head coach, and open his own coaching academy for struggling NFL coaches to attend.

Listen, the Cardinals aren’t going to make the playoffs next season.