What are the Jazz and Spurs playoff chances right now? 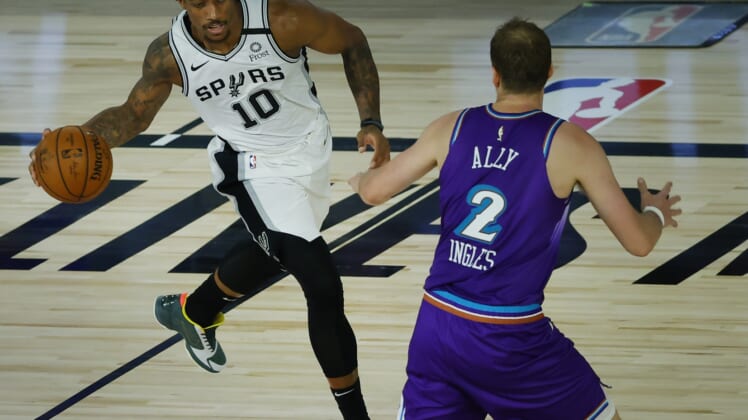 The San Antonio Spurs took out a depleted Utah Jazz squad by the score of 119-111 Friday afternoon at Walt Disney World. This loss might not have been by design for Utah, but the team’s brass did not make it easy.

Ahead of the game, the Jazz announced that starters Mike Conley, Rudy Gobert and Donovan Mitchell would sit the game out. Conley (right knee soreness) and Mitchell (left peroneal strain) were dealing with minor injuries. Meanwhile, Gobert simply got the afternoon off.

For Utah, it made sense given that they have another game against the Denver Nuggets Saturday afternoon. It’s the team’s only back-to-back on campus in Orlando.

This didn’t mean a whole lot for Utah outside of seeding. The team has already clinched a playoff spot after a dominating run prior to the season being suspended back in March. Utah currently sits at 43-26 and as the fifth seed in the Western Conference. It is three games ahead of the Dallas Mavericks for that spot. Though, there’s a bunch of teams grouped together three-through-six.

This obviously makes Saturday’s game against Denver much more important than Friday’s loss to the Spurs. The whole idea for Utah will be to make sure Rudy Gobert and Donovan Mitchell are 100% and ready to go for the playoffs. That’s especially true given Utah’s remaining regular-season schedule.

If anything, Utah wants to avoid taking on the Lakers in the first round. The only way to eliminate that possibility would be to catch Denver for the third seed. Hence, why the game Saturday is such a big deal.

San Antonio is in a bit different of a situation in the Western Conference Playoff race. By virtue of their win on Friday, the Spurs sit at 30-38 and two games behind the Memphis Grizzlies for the eighth spot in the Western Conference. If Gregg Popovich’s squad is within four games of that position and sit as the ninth seed, they would take part in a best-of-three play-in tournament.

This veteran-laden squad is an intriguing component heading down the stretch in the Western Conference, primarily with Pop on the bench and DeMar DeRozan still doing his thing at guard. Given the Spurs’ experience, they could make it hard for the Lakers in the first round of the playoffs.

Much like Utah, the Spurs don’t have an easy go at it with three games remaining on their schedule

Regardless, the best San Antonio can hope for here is a potential play-in-tournament with a Round 1 series against the top-seeded Lakers.