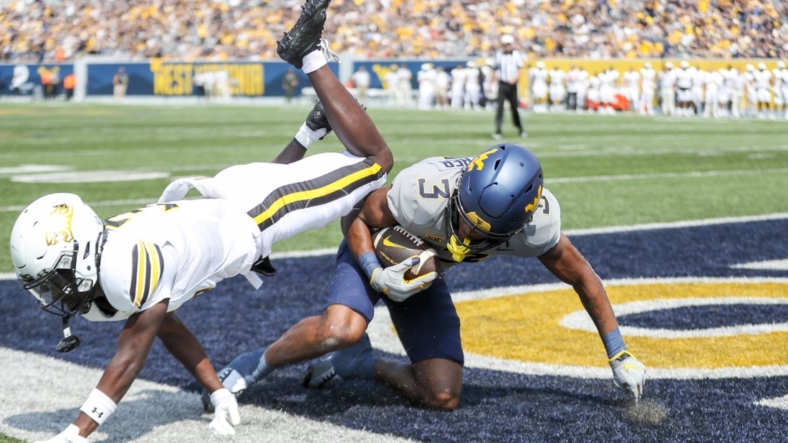 In improving to 23-0 all-time against teams from the Football Championship Subdivision, the Mountaineers dominated the Tigers (2-1) with a nearly flawless performance.

Using four different quarterbacks, the Mountaineers scored on all 10 of their possessions without committing a turnover. The Mountaineers’ first accepted penalty came on the next-to-last play of the first half.

One decision by Brown that Mountaineer fans can’t quibble with is the preseason shift of Donaldson from tight end to running back. In three games, the 6-foot-2, 240-pound Donaldson has carried 29 times for 274 yards and six touchdowns.

In the first quarter on Saturday, Donaldson side-stepped two defenders and broke into the clear on an 82-yard touchdown run that put WVU up 21-7.

West Virginia started fast, driving 75 yards on 10 plays in an efficient march in which the Mountaineers never faced third down. Kaden Prather capped it with the first touchdown of his college career on a 2-yard pass from Daniels. Prather finished with a team-high six receptions for 51 yards.

After Hunter’s kickoff return touchdown, the Mountaineers took the lead for good with another 75-yard march, this one capped by a 3-yard touchdown carry by Mathis that made it 14-7.

In the second half, backup quarterback Garrett Greene scored on an 11-yard touchdown run. Then third-string quarterback Will Crowder completed all six of his passes for 57 yards and a touchdown throw to Jeremiah Aaron.

No. 4 quarterback Nicco Marchiol capped the Mountaineers’ scoring with a 26-yard touchdown pass to Preston Fox.