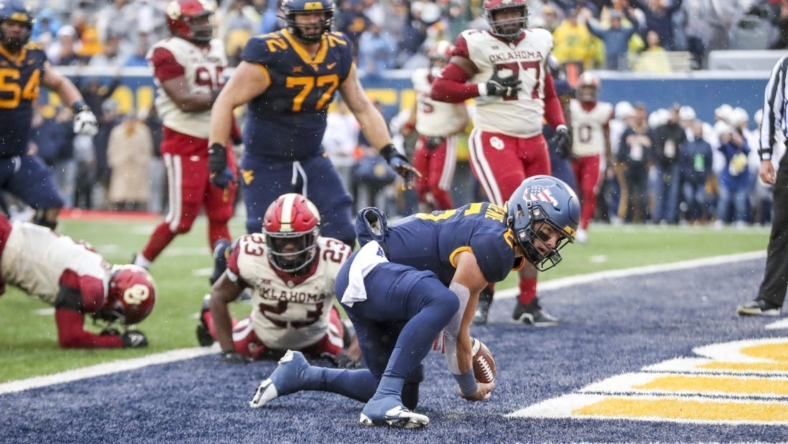 In the Mountaineers’ first win over the Sooners since moving to the Big 12 in 2012, West Virginia backup quarterback Garrett Greene ran for 119 yards and two touchdowns and threw for 138 yards and another score.

The Mountaineers got the ball back with 6:24 remaining and the game tied, and deliberately moved the ball downfield with plenty of help from Greene.

Greene hit Bryce Ford-Wheaton on a fourth-down conversion pass to keep the drive alive, then West Virginia kept it on the ground.

Greene’s seven-yard run on third-and-6 from the Oklahoma 17 put the Mountaineers in position to run out the clock, and they did, with Legg kicking the field goal as time expired.

Eric Gray rushed for 211 yards and two touchdowns for the Sooners, who outgained West Virginia 426-406.

Neither offense had much success until late in the first half.

The Sooners (5-5, 2-5 Big 12) got the ball back at their own 4 with just more than two minutes remaining, kicking off a wild finish to the first half.

On this drive, though, he didn’t, as Dillon Gabriel’s 67-yard pass to Mims set up Eric Gray for a 12-yard touchdown run that put the Sooners ahead 10-0.

West Virginia (4-6, 2-5) returned the kick near midfield, then Greene, who had alternated with starter JT Daniels in the first half, led the way with a 33-yard run followed by a 5-yard touchdown run.

But the Mountaineers holder couldn’t handle the snap on the extra-point try. Legg picked it up but was hit hard from behind by Oklahoma’s Robert Spears-Jennings to jar the ball loose.

Billy Bowman scooped it up and returned it 88 yards for a defensive two-point conversion to give the Sooners a 12-6 lead at halftime.

Late in the third, Ford-Wheaton caught an 8-yard TD pass from Greene to put West Virginia ahead 13-12. But about two minutes later, Gray’s 5-yard TD run gave Oklahoma a 20-13 lead entering the fourth.