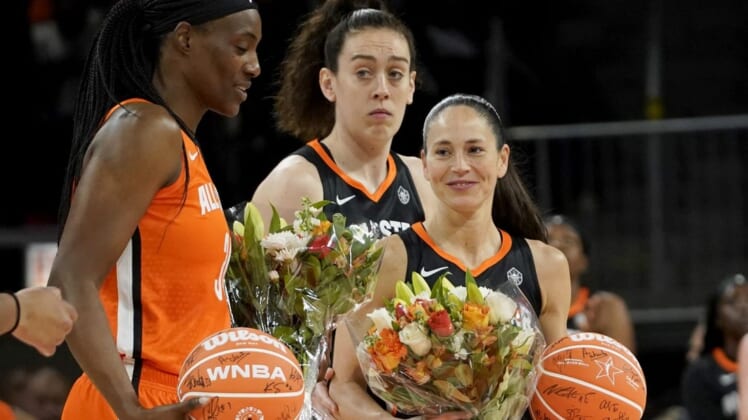 The Seattle Storm have had time to settle in for a few days before the homestretch of the season.

The rest may well help the team continue its playoff push while simultaneously trying to celebrate the career of Sue Bird, with the Indiana Fever visiting for Sunday’s game in Seattle.

Bird has just four home games left. The 41-year-old point guard logged 28 minutes in the team’s most-recent game, and the five-day break no doubt helped her prepare for the stretch run of 12 games in 29 days — with eight of those games on the road.

The Storm (16-8) have been off since Tuesday’s 83-74 victory against Dallas that extended their winning streak to three games. It was the first game following the WNBA All-Star break.

Breanna Stewart’s 19 points paced the Storm in the Dallas game as Bird had seven assists.

“We continue to move the ball,” Storm coach Noelle Quinn said. “That brought some other players some scoring.”

Stewart hit another notable mark in that game, reaching the 500-assist mark. That put her third-fastest in WNBA history to 3,000 points, 1,000 rebounds and 500 assists as she appeared in her 171st game.

The Storm are also 5-1 since Tina Charles rejoined the team.

Quinn liked seeing quality 3-point attempts in the most recent game and that the Storm attempted 18 free throws.

“There’s balance in what we were doing and that’s important,” she said. “Anytime we can get five in double figures, score the ball and marry that with our defense, that makes for a very good night.”

The Fever (5-21) have a quick turnaround after Friday night’s 87-77 home loss to the Minnesota Lynx. Indiana holds an eight-game losing streak as interim coach Carlos Knox still tries to figure out the right formula.

“It’s tough,” Fever guard Kelsey Mitchell said. “You think you’re close … you’re still not there. I guess it’s a part of the process.”

Knox said the team’s development has been gradual, noting that foul troubles have hampered reserve Emily Engstler’s ability to maintain a high level.