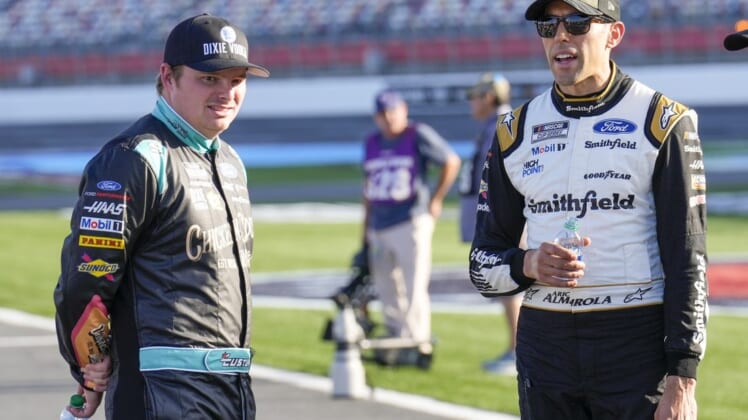 Custer won his first career Truck Series pole at World Wide Technology Raceway in 2014. A year later, he won the race from the second starting position. Since then, the egg-shaped speedway — similar to Darlington without the high banking — has been resurfaced.

“It gives you a little bit of confidence,” Custer said of his history at Gateway. “I haven’t run the track since 2016, I think, so I’ve never run on the repave. So that’s going to be interesting, but I kind of know the idea of the track.

“One end is extremely tight … and then you have the other end that’s really similar to maybe New Hampshire or Phoenix (Turns) 1 and 2, where it’s really wide and sweeping, so just kind of have to get used to the repave. I think I have an idea of the race track from using the Ford simulator, but the repave is definitely going to be different than what I was used to.”

Custer is fresh from a strong showing in the Coca-Cola 600 at Charlotte Motor Speedway, where he was running in the top five late in the race until a crash in overtime took him out.

Currently 27th in the standings, Custer almost certainly needs a victory in one of the next 12 races to qualify for the Cup Series Playoff.

“You just have to keep grinding,” Custer said. “It’s a really long year, and you just have to stay at it and keep working with your team and get your cars better and go week-by-week. But I think the biggest thing from last week (at Charlotte) is that we can take a lot of positives and a lot of momentum from that.

“I mean, being able to run up there in the top five and have a shot to win the race at the end, that makes you pumped to go to the track the next week. I think we’re going in the right direction. It’s just a matter of cleaning some things up and having some good luck.”

World Wide Technology Raceway is located just east of the Mississippi River, within sight of St. Louis’ most visible landmark, the 630-foot-high Gateway Arch. Race fans in the Greater St. Louis market have rewarded the track with a sellout for the Cup Series’ debut race.

The NASCAR Xfinity Series ventures to the Pacific Northwest on Saturday for the Pacific Office Automation 147 at Portland International Raceway (4:30 p.m. ET on FS1, MRN and SiriusXM NASCAR Radio).

The race marks the series’ first visit to the flat 1.967-mile, 12-turn road course, which runs in a clockwise direction. The NASCAR Camping World Truck Series raced at the track in 1999 and 2000, with Greg Biffle and Andy Houston, respectively, winning the two events there.

Road course ace AJ Allmendinger, who won earlier this season at Circuit of The Americas (Austin, Texas), is the obvious favorite at Portland. Indeed, Allmendinger has a history at the track.

“I’m really looking forward to going back to Portland,” Allmendinger said. “Last time I was there was 16 years ago when I was able to win my first Champ Car race.

“It’s going to be truly special to go back to the track for the first time since then, and I think we will put on a great race for the Xfinity Series.”

Regardless of the outcome, the weekend promises to be an adventurous one for Allmendinger, who will also compete in the NASCAR Cup Series debut race at World Wide Technology Raceway on Sunday — without any prior laps in the No. 16 Kaulig Racing Chevrolet.

“I’m looking forward to pulling some double duty and getting to drive the Cup car at Gateway on Sunday,” Allmendinger said. “I have never driven there and will miss practice and qualifying for the race, but I know we are up for the challenge that the weekend will bring.”

There are just six races left in the NASCAR Camping World Truck Series season, and that fact all but guarantees ratcheted-up intensity in Saturday’s Toyota 200 at World Wide Technology Raceway (1:30 p.m. ET on FS1, MRN and SiriusXM NASCAR Radio).

There’s also serious cash available through the Triple Truck Challenge, which starts Saturday with the first of three races in the program. A prize of $50,000 available to the race winner, with an additional $150,000 awarded to a driver who wins two of the three races, and a $500,000 haul for any driver who can win all three.

So far this season, five drivers have locked themselves into the Playoff with victories: Zane Smith (three wins; the only multiple winner), John Hunter Nemechek, Ben Rhodes, Chandler Smith and Stewart Friesen. That leaves five Playoff spots available to the rest of the field.

Matt Crafton currently is 10th in the standings-the last available Playoff spot-with a 25-point cushion over 11th-place Tanner Gray. Crafton also boasts the most experience at World Wide Technology Raceway, with 18 starts there, only three of which resulted in top-five finishes.

John Hunter Nemechek is the only former World Wide Technology Raceway winner entered in Saturday’s event. Nemechek triumphed in the 2017 race in his family-owned Chevrolet. He now drives the No. 4 Toyota for Kyle Busch Motorsports and leads the series standings by seven points over Rhodes.